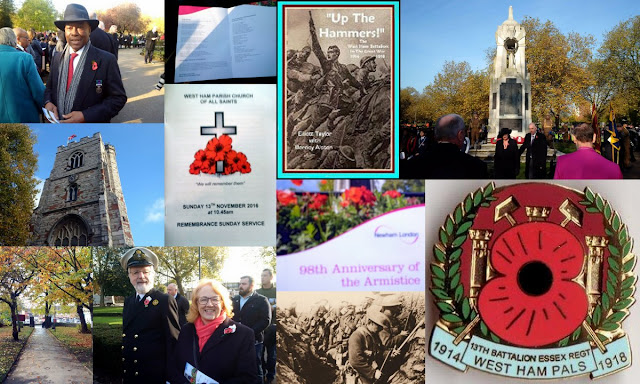 Top left of collage is a picture of Cllr Winston Vaughan, who I think is now the only elected Newham Councillor to have been on active service in the UK Armed Forces. He is seen wearing his campaign medal resulting from the Aden Emergency in 1967.  Cllr Ann Easter is pictured with her husband Christopher Owens who is a Chaplain to the Newham Sea Cadets.

The Remembrance Service at All Saints on Sunday 13 November was also particularly moving since I was aware that it was the 100th anniversary to the day of a very bloody "Battle of the Somme" First World War attack at Quadrilateral, France by the locally recruited "West Ham Pals" Battalion.

During the service a young,  newly commissioned Lieutenant from the local Army Reserve Battalion "7 Rifles" gave a reading and also then talked about his experiences of comradeship and team building as a soldier. Like me he had first joined the (then) Territorial Army at University.
Posted by John Gray at Tuesday, November 15, 2016