"Mayor facing a challenge for leadership" 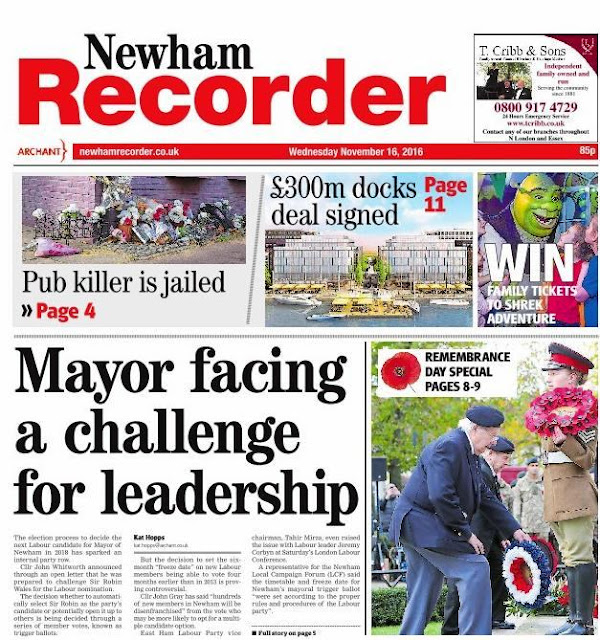 Front page news (and page 5) in this week's Newham Recorder about the challenge by Cllr Dr John Whitworth to Robin Wales about who should be the next Labour candidate for Newham Mayor.

If there was a NO vote and therefore an open selection then I have no doubt that other younger, black, asian and females candidates would also put themselves forward.

Tonight East Ham North ward voted NO in the trigger for an open and democratic selection process.

Check out the independent Newham website https://triggerdemocracy.com/ for more information and read below the full challenge by John to Robin.

An Open Letter to Sir Robin Wales, Mayor of Newham

I think it is time for an open selection of the next Labour candidate for Newham Mayor and I therefore challenge you to a contest and declare myself a candidate.

If you were re-nominated again by a trigger ballot, then by the end of your term you would have been in power for 27 years.

This, in my view, would not be good for local democracy, the Labour Party or the people of Newham.

My mode of governance would include the following key elements:

a. Shaping Council policies based on authentic Labour Party principles to reduce inequalities and ensure all people can thrive

Current Council policies will be initially maintained, but subjected to review by the Mayor, Cabinet members, Council officers and councillors as part of a process which will also seek the views of our residents.

I will shape policies based on the principles of democratic socialism as represented by our current Labour Party leadership which will aim to reduce inequalities, combat discrimination and promote fellowship and solidarity among all sections of our community.

Enhancing the lives of the people of Newham in these ways will also necessarily entail managing resources in such a way that the quality of provision of essential services, public amenities and infrastructure are maintained and indeed improved.

I believe that promoting the interests of residents can, and should, go hand in hand with ensuring the wellbeing and adequate payment of the staff that that serve them at all levels.

b. Maintaining trust of Newham residents through transparent and open local government

In place of your presidential style of leadership I will introduce Cabinet governance, whereby Cabinet members will be delegated powers and major decisions will be made collectively by the Mayor and Cabinet. The Mayor will therefore function as a chair of a board.

Policy proposals will then be presented to Labour Group for informed discussion which will contribute to the shaping of these policies.

Councillors will be encouraged to discuss the Council’s policies and conduct with their ward residents and party members in their branches, who will give feedback to Labour Group.

This input will feed through both the constituency parties and the Local Campaign Forum, which will become an active partner of the Council. At the same time, the Scrutiny system will be revived with the Council’s Overview and Scrutiny Committee and the subordinate commissions receiving adequate resourcing so they can function as a real critical friend of the Executive.

During my term of office I will organise a wide consultation among Councillors, Labour Party members and residents on their wish to either continue with the Directly-Elected Mayoral model or replace it with an alternative system.

When the consultation is complete the question may be submitted for a referendum in time for the change, if decided, to be implemented for the 2022-2026 Council term.

A Directly-Elected Mayor occupies a very powerful position. I believe that power of this kind should be shared, subjected to scrutiny, and not remain in the hands of a single person for too long. This is why I am challenging you to a contest to be the Labour candidate for Mayor of Newham.