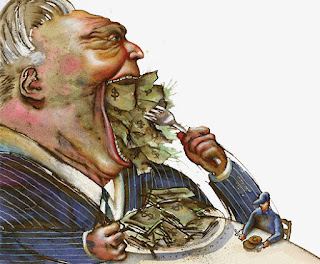 While I hope that the United States will not elect Trump to be their President tomorrow, I was
fascinated to read the statement below at a recent Newham Council Investment and Accounts committee.

"Even if Trump loses, the anti-Establishment, anti-trade and anti-immigration sentiment will not go away until rising inequality with rich countries is addressed and reversed".

This was in a report by our economic advisers to our billion pound staff pension fund, Fatham Consulting. Who are not known to be any sort of lefty think tank.

At the end of the meeting I asked their consultant if I could quote them (he agreed) and also what other Marxist analysis did the firm believe in? (to which he just grinned).

I think they are 100% right and that people need to understand that the rise of Trump and the vote for Brexit was driven by a backlash against rising income inequality.

Not every supporter of Trump is motivated by this and there was plenty of principled support for Brexit but if you have a rubbish, poorly paid insecure job with no future, no access to decent housing or public services then you are going to be angry and want to protest and thump the establishment.

Ordinary working people either side of the pond feel betrayed by years of declining wages while the very rich just get more and more wealthy.

I heard a Tory minister yesterday on the BBC describe Brexit as a "punch" to the establishment similar to the 1945 General election result. I think he is right about this but I think that the Tories are simply incapable of any meaningful reform.  We need to deliver another "punch" to the system as we did in 1945 at the next General election and elect a radical alternative government which will genuinely tackle and reverse inequality.
Posted by John Gray at Monday, November 07, 2016