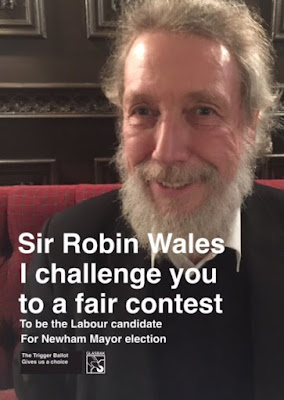 "A councillor has said he wants to “challenge” Sir Robin Wales as the Labour Newham mayoral candidate for 2018, the Recorder can reveal.

West Ham ward Cllr John Whitworth informed the existing Newham mayor of his intentions in an open letter this morning.


He is now “appealing” to Labour members and affiliated organisations (trade unions and socialist societies) to vote “no” in “trigger ballots” starting today across the borough in order to force the mayor into an open selection election process.
In his letter to Sir Robin, Cllr Whitworth wrote: “If you were re-nominated again by a trigger ballot 2016, then by the end of your term you would have been in power for 27 years.
“This, in my view, would not be good for local democracy, the Labour Party or the people of Newham.”
He went on to say that should he formerly challenge Sir Robin to a leadership contest and win then he would review Newham’s directly elected mayoral model and replace it with an “alternative system”.
In the letter he wrote: “A directly elected mayor occupies a very powerful position. I believe that power of this kind should be shared, subjected to scrutiny, and not remain in the hands of a single person for too long.
“This is why I am challenging you to a contest to be the Labour candidate for Mayor of Newham”
Speaking to the Recorder, Cllr Whitworth said: “I think the fact that someone is prepared to challenge [Sir Robin Wales as Labour candidate for Newham Mayor 2018] will encourage people who have decided not to vote for an open selection.”
He added: “He has got an executive position with very strong powers. The concern is really that leaders in executive positions should not hold it for too long.”
Voting in the affirmative nomination process, also known as “trigger ballots”, begins today.
Labour members wishing to participate are requested to attend branch meetings and make a decision on whether to accept ‘affirmative nomination’ giving the Labour incumbent another four years or to “trigger” an open selection.
Website campaign Trigger Democracy has argued that not all Labour members have received their letter notifying them of where they have to go to vote as of yet.
A representative for the campaign, who wishes to remain anonymous, said Labour members were being urged to “Vote NO for Choice” at the meetings.
They said: “Trigger Democracy wants all Labour members to have a choice of who they want for Mayor of Newham.
“Members haven’t had a choice of candidates since 2002. We think it’s time Labour members had the chance to hear from women, young people and people from ethnic minority groups, people who reflect today’s Newham, about what they would do as Mayor of Newham.”
Sir Robin Wales has served as Newham Council leader for 21 years. He was elected leader of Newham Council from 1995 to 2002 before becoming the first Labour directly elected mayor in England in 2002.
He was re-elected in 2006 and 2010 and won his fourth term in office in May 2014 via an affirmative nomination process.
Sir Robin has been contacted for comment.
Posted by John Gray at Monday, November 14, 2016