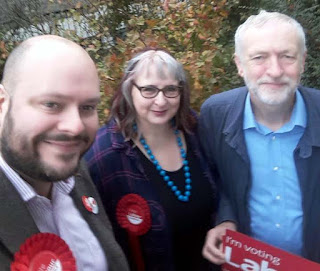 Fantastic news. Yvonne (aka Stroppy) has been elected! My former blogging pal and daughter of former Newham Councillor Doris Maxwell, was elected last night in a Hackney Council by-election.

This is really good news for Labour. Both times I went to help out with canvassing were spent in working class social housing estates. Increasing our vote here after a time when the Labour Party has been in a bit of a mess is encouraging. But one swallow does not a summer make.

Having a hard working good candidate (who is also firmly on the "left" of the Party and a long standing supporter of Jeremy Corbyn) who local activists across the Party united to support, obviously made a difference.

I have of course been telling everyone I know that I have been her political mentor and taught her everything she knows about politics:)