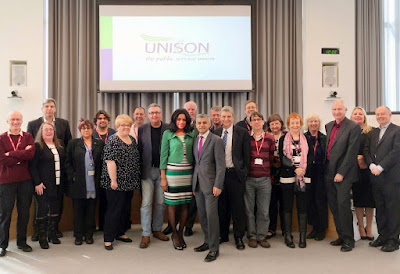 This is below a motion by Greater London UNISON Regional Labour Link to the London Labour Party Conference next Saturday 12 November.

"Housing continues to be the biggest challenge that Londoners face in the capital today with many who grew up in the city now unable to live here, rent taking an ever increasing proportion of wages and Londoners being pushed further and further into the suburbs as prices in central London continue to soar.

Home ownership is becoming a distant dream for many and the increasing numbers sleeping rough on the streets is evident for all to see.

This Regional Conference notes that housing formed a key issue during the recent London Mayoral election.  We welcome the election of Sadiq Khan as Labour Mayor and the manifesto commitments he made to build genuinely affordable homes for Londoners.

The recently passed Housing & Planning Act contains controversial measures such as the Right to Buy and forced sale of higher value councils homes which will lead to a further depletion of social and affordable homes in London.

Under the Pay to Stay policy social housing tenants who live in London with a combined household income of more than £40,000 will be liable to pay up to market value or lose their home.  Those who work in London and live outside who have a total income of £31,000 face the same.  Although there will be a certain disregard it will mean a massive increase in rent and tenants could face, what will effectively be, an income tax penalty rate of 83%. Those affected will be not just the well paid but caretakers, school cooks, street cleaners, hospital porters, gardeners.

The policy will be voluntary for Housing Associations (who will be able to keep additional rents collected to invest in housing) but local authorities will be compelled to implement it without keeping the income generated from increased rents – this will have to be all remitted to the Government.

The LGA has recently estimated that more than 70,000 tenants will have to pay an average rent rise of £1000 per year under pay to stay.

Housing officers will be required to demand personal and private financial information from all tenants even those who have never applied for housing or council benefits.

The Tories claim that Starter Homes will solve the Housing Crisis. According to the treasury however only 30% of the population will ever be able to afford such homes. What about the 70%!

Furthermore the Act will also end lifetime security of tenure, restrict successions of tenancies undermine the role of the regulator and give greater planning powers to private developers.

Fixing London’s housing crisis is undoubtedly the single biggest thing Labour can do to improve the lives of Londoners.

This Regional Conferences notes that the Government will have to return to Parliament to gain approvals for regulations and enabling legislation. This gives us campaigning opportunities.

This Regional Conference calls for:-
A great picture above of UNISON National Labour Link Committee with the now London Labour Mayor, Sadiq Khan last year. He gave us a inspiring speech on how Labour can make a real difference to housing policy.


I understand that there is at least one other Housing motion on Saturday so if this one passes Standing Orders committee then it is likely to be what we call "composited" (that is combined with the other Housing motion) at the conference next weekend.
Posted by John Gray at Monday, November 07, 2016