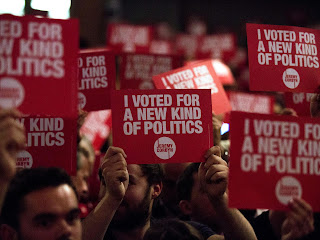 At the London Labour Conference yesterday (which I will post more on later) the Labour Leader, Jeremy Corbyn, gave a stirring and passionate speech on offering hope and inspiration, which resulted in a standing ovation.

Jeremy also stayed for an open Q&A and East Ham Labour Party Vice Chair, Tahir Mirza asked him whether he was aware that in Newham a trigger ballot had been started to select a new Labour candidate for the Newham Mayor in the May 2018 election.

This is being held 5 months early compared to the last Newham Mayoral trigger ballot in 2013 which means due to an early trigger date that around 800 members will be unfairly excluded from taking part in this selection.

Jeremy replied that he was not aware that any trigger ballots were going on at the moment and he would bring this up at the Labour Party NEC next week.
Posted by John Gray at Sunday, November 13, 2016