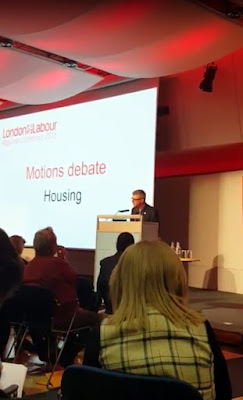 "John Gray, Unison delegate and speaking in favour of this composite. An unison motion on housing is part of the composite and I want to concentrate in this contribution on the Housing and Planning Act and the major threat that it poses to Londoners and the future of London.

Conference, I think we all here today understand that we are living through a housing crisis and the lack of affordable homes of all tenures is blighting the lives of workers and their families across our city.

More and more people, particularly the young, are at risk of rent arrears, evictions and homelessness, causing financial hardship and misery to all those affected.

Yet the Tories has failed to tackle the crisis. In fact just when you think things cannot get any worse - they come out with the Housing and Planning Act. Conference I work in housing in London.


Let us be clear what this act will mean for Londoners in particular.

The extension of Right to Buy to housing associations will delete housing stock for all and under the Pay to Stay tax many workers that UNISON represents will face massive rents increases.

Those most affected are not the well paid - but caretakers, school cooks, nurses and street cleaners.

Conference, you can be pretty darn sure that due to our high rents the majority of tenants hit by this rise will be Londoners. It was worked out by Labour housing spokesperson, John Healey, that the "pay to stay tax" will be the equivalent of a staggering 83% income tax on those cleaners, cooks and nurses who earn a total combined household income of over £40,000

It will also result in the means testing of all council and housing associations tenants even those who have never claimed benefits.

Councils in London are going to be forced to sell their homes to pay for the Tory right to buy bribe. That cannot be right.

But Conference the Act is not yet a done deal. There is still time to campaign against this Act. The government has to come back to parliament to table regulations. In the housing press this week it is clear that the government is running into trouble over implementing the act

Conference, in London we must use our power and influence to tell housing associations not to sell homes and not to tax their residents.

We must tell residents that the Tories are coming for their homes, they are also getting rid of security of tenure, they are going to drive ordinary Londoners out of their homes by massive rent rises

Conference please support this composite please join the fight back and play your bit in "Axing the Housing Act". Thank you.
Posted by John Gray at Saturday, November 19, 2016