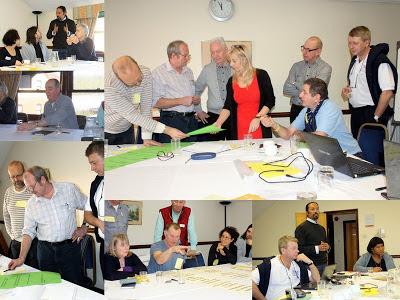 Last weekend I was in Bury St Edmunds for the Regional SGE Annual General Meeting and Seminar.

There were 16 Community branch delegates from all over the region. I work in London Region but my employer has offices in 4 different UNISON regions and we had three Eastern region delegates present at this meeting.

First there was the business AGM. Their excellent Chair, Henry Meiklejohn, went through minutes, accounts, elections, work plan, constitutional amendments and motions. Afterwards I was their guest speaker. I spoke on the current state of our sector, which is pretty disastrous, due to cuts in Supporting People budgets, welfare reforms and certain rogue employers leading and cheering this Governments race to the bottom; what we can do about it now to defend members and provide quality services but also where we should be aiming for in the long term to transform our sector.

The following morning the seminar began with a presentation by Simon Watson, who is a UNISON National Officer for Community. He gave a comprehensive overview of our Service Group history, structure and plans for the future. One delegate made a point that he had heard Simon 2 years give a similar presentation on Community but since then a lot of the obvious gaps highlighted have since been filled.

There was a fascinating talk on the history of politics and trade unions by Community SGE member, Peter Todd. He made it clear that trade unions must grow up and stop talking about the past but find new ways of doing things.

UNISON Local organiser in Bedfordshire and Hertfordshire, Catherine Ward, led a workshop on strategic campaigning. Analyise, identify issues, plan, set targets but most of important to stop, think and evaluate. Be prepared to develop new tactics to fit new strategies.

Next Regional organiser (and Head of Community in Eastern Region), Nalin Cooke, talked about organising and recruitment in our sector. He referred to the key techniques that the Barack Obama campaign used to motivate supporters: Use “Anger, Hope and then Action” to galvanise support.

We then had a role play where we had to interview each other and act a meeting with a non union member and try to persuade them to join using the Obama principles. Afterwards each group had to demonstrate what we had discussed in the role play.

One Group (mention no names) played out this role play:-

Union rep: did you know that your employer is planning to kill your first born son?

Union rep: don’t worry; together we can stop this

Non Member: Fantastic, but how?

Union rep: Here is an AK47 and the home address of your CEO.

Now, will you join the union?

I really enjoyed speaking at the AGM and participating in this well organised and thoughtful Seminar. Our Community Service Group is finally finding its feet and establishing itself throughout the union.

(Thanks also to Theresa for all her hard work in organising this event).