Boris and his Pension Merger Plan to Rescue GB Plc 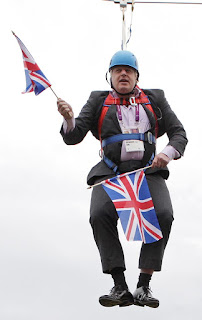 On Monday the FT rather oddly announced that the new Chair of the London Pension Fund Authority (LPFA), Edmund Truell, with the support of Mayor Boris Johnson, is to merge all 34 London Staff Council funds "into a single scheme and channel more investment into the capital’s infrastructure projects".  The Evening Standard also waded in on Tuesday in a similar vein here

The fact that neither Boris nor the LPFA has any legal powers to do this was not mentioned.

Now it makes perfect sense to look into merger in order to see if it will save money and stop Councils and pension scheme members being ripped off by vested interests. Equally, no one would be more happier than me if we could use pension funds to kick start the economy and say build more homes.

But there is a problem. Some 4.6 million Brits have a local government pension entitlement. Its primary purpose is to pay an income in retirement and not to be a substitute for inadequate investment in infrastructure by Government.

Some people also think that the LPFA is looking at merger due to its own internal financial predicament as a mature scheme with many pensioners claiming their money but relatively few active members still paying into the scheme.

There has also been claims of scaremongering. The Local Government Pension Scheme as a whole has assets of £160 billion. It is not broke. Some schemes do indeed have difficulties but in many cases this is due to outdated and irrelevant accounting measures which price scheme liabilities on the current abnormal 200 year low in gilt yields.

So far there has also been no mention either that in the new LGPS 2014 scheme members (and their "widows & orphans") will face the future costs of poor investment performance.  Under European and UK law pension funds must be run in the interests of beneficiaries, then the case for or against merger or for investment in any particular asset class, must first and foremost take into account their interests. Not short term political ambitions for a flat in Number 10.

There are a number of obvious risks. What if merged Council pension funds invest in building homes for rent and there is a property price crash? What if investment in alternative electricity supply is undermined by a change in future Government policy? In other countries pension funds that invest in infrastructure get significant Government financial support or guarantees.

There is also the issue of "why only the LGPS?". While it may seem rather strange that there are 101 separate LGPS schemes worth £160 billion, there are about 53,000 private Pensions schemes. The vast majority of whom are tiny. How well managed are they? This is also important to GB Plc since the Private sector defined benefit schemes alone have £1.1 trillion in investments. Surely it makes sense to look at merging private sector schemes as well?

The Secretary of State, Eric Pickles, who the FT claims is a supporter of Council Pensions merger, may have the legal power to force merger.But unless this is done sensitively and by putting the interests of beneficiaries first, then it is likely to end in tears. Which if the supporters of merger are right, would indeed be bad news not only for the LGPS but also for GB Plc.
Posted by John Gray at Thursday, February 21, 2013

ignoring the politics bit and looking at the question
"why only the LGPS?"
it does just make sense to bring them all under one umbrella and save the costs and increase the weight they can throw around the City - that all has to be a good thing doesnt it ?

the private sector is different - yes you are right thousands of schemes are inefficient - but i dont see how you can bring them together - different sponsoring companies bring with them different issues, credit worthiness, attitude to risk for the widows and orphans etc

I simply don't know at this point. There has not been enough research or debate. There may well be other ways of achieving the same aims short of merger. Some sort of consolation seems inevitable.

The private sector is more difficult but not that different. All LGPS are multi-employer schemes. 25% of members do not work directly for local authorities.

There use to be I think thousands of different Council pension schemes, now there are "only" 101. So merger issues were resolved.

I think that the Government needs to intervene and sponsor sector or industry wide pension investment pools. It will be difficult but in this age of computers not impossible.

If it is not legal for Boris and the LPFA to do this then why is it happening?

Well...its not. Yet. Pickles in theory the power, not Boris or LPFA. But there is no guarantee that if Pickles attempted to do so then he would allow the London Mayor the powers to do so.

I'm not even sure if Boris can merge the TFL pensions funds with the LPFA. I think they are run as private sector schemes and will have deeds and independent trustees who may be able to block merger.