Cornish Rebellion 1497 and the Battle of Blackheath 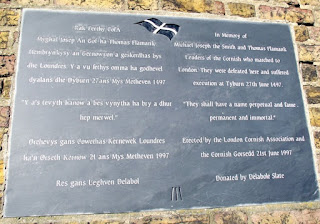 A few weeks ago I went on a Sunday walk from the Isle of Dogs, under the Greenwich tunnel and then around Greenwich. To my surprise I came across this slate memorial plaque in Blackheath.

It remembers the leaders of the Cornish Rebellion of 1497.   Michael Joseph, a blacksmith  (An Gof) and a lawyer, Thomas Flaman.

Astonishingly there was a battle near this spot between a rebel army from Cornwall and the army of King Henry V11. The rebellion was sparked off by taxes being levied in breach of traditional rights and a 10,000 strong army marched all the way from Cornwall to demand the King changes his mind.

He didn't and his 25,000 army with heavy artillery routed the rebels.

The leaders were executed at Tyburn (now site of Marble Arch).

Is this a precursor to the "No taxation without Representation" of the American Revolution?

It is amazing what history you just happen to stumble across.

Hi
I am going to be walking from Blackheath railway station toGreenwich through the Park on Saturday and plan to look for this memorial to show my grown up children who were both born in Cornwall so are technically Cornish.
However the tourist people inGreenwich had no idea of this plaques existence nor even of the battle itself when I called to ask exactly where is.
The London Cornish Society should get their act together and publicise it better!