How the bedroom tax works.... 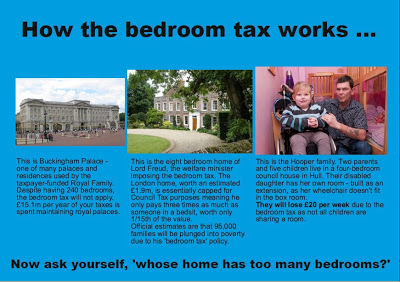 Search the Internet for "bedroom tax" and you will find mind bogglingly awful stories of families facing eviction and hardship because of it.

Steve Hilditch from Redbrick thinks that the Tory coalition may finally be politically vulnerable over this issue since it will impact all MPs constituencies.

Families whose children have died won't be able to pay the rent since their housing benefit will be restricted. They are deemed to be "under-occupying" (it's too big for them) their properties following the deaths of their children.

The mother whose son has joined the Army and is due to go to Afghanistan was told by Tory MP to "get a lodger".

I hope it does.

UNISON members who work in housing management will be placed in an impossible position. They will be expected to evict tenants on housing benefit whose children have left home even if they have been exemplary residents and have lived there all their lives. Established communities will be shattered.

This and the other "reforms" will also cost Councils and Housing Associations millions of pounds in arrears and extra administration. Money better spent on building new homes and kick starting the economy?

Click on picture to bring up details and decide for yourself who has too many bedrooms.
Posted by John Gray at Saturday, February 02, 2013

Maybe this policy has been drafted wrong but there is a real problem here.

People are living in social housing in houses that are bigger than they need and due to Thatcher's treacherous Right to Buy policy there is a such a shortage of family houses.

Frankly whether they are working or on benefit (but more so if they are on benefit as we are all having to subsidise them) they should be made to move on.

There isnt endless amounts of money and Id rather see money spent on education, health or building new houses! the scenario of seeing a couple who's kids have left home living in a 3 or 4 bedroom house so they can have rooms for the grandchildren whereas down the road a family is growing up living is a series of grotty flats or really cramped conditions with no space or sense of security - basically we need more social housing!

looking at the detail behind the Hooper case

its not about the disabled issue its about not having the children have a bedroom each ...

"At the moment, three of couple's children – Lee, nine, Scott, five, and Cassy, two – have their own rooms."

I think you make a well made case for more social housing but there are ways of encouraging tenants to downsize other than by threatening to evict them.

There is also an ideological element. You don't have any reduction in mortgage interest support if you are an unemployed home owner and you under-occupy? Why only those who rent cannot have a spare room for the Grandchildren?

Can you imagine what housing estates could become if every flat was full only with families and kids sharing rooms. What happens when they grow up? There won't be anywhere for them to go?

We are still one of the richest countries in the World. It is the collapse in construction that is dragging down our GDP the most when we have millions of acres of land with planning permission for homes and millions of unemployed builders?

This is not rocket science.

Check out the links in Red Brick post and you will see that the family are concerned that the 5th room used for their autistic son may also be classified as a bedroom.

I did check out the links - there will be some deserving cases getting caught up in the rules for all that have to be followed, but really... paying for a compact studio for

"Jason Gaffney. He's unemployed, and on the government's work programme. His flat has two bedrooms, one of which he uses as a compact studio"

can somebody pay for my art studio for the career that i really want to follow ???

Yes, I don't think that particular example made much of a point but it does not take anything away from the horror that so many vulnerable people will suffer from these changes.

Do we really want to copy USA poverty ghettos with their massive levels of violence and murder in our inner cities?