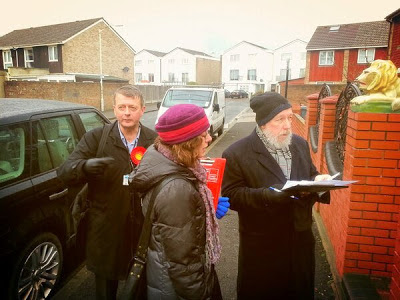 Picture is from this morning's street surgery and doorstep in West Ham Ward, Newham, London. I had a traditional Councillor surgery in Vicarage Lane Community Centre beforehand.

During which I tried to help a constituent who is being forced to move due to the Tory Bedroom tax. S/he is a single parent in a 3 bedroom property with 2 young daughters who are now expected to share a bedroom, so s/he has to uproot them from friends and schools to move to a 2 bedroom.

When the children get older, will be be able to rehouse them in a 3-bedroom? Or will they have to share a bedroom until they leave home? Roll on General Election in 2015.

It began to rain a few minutes before we met up for the doorstep and continued off and on for the rest of the session. There were 4 of West Ham ward Labour Party finest,  Cllr Ron Manley, Secretary John Whitworth, Julieanne Marriot, Adam Tyndall (and of course me).

Things were a bit slow to start with lots of people out but eventually we picked up a new Labour Party member and lots of case work relating to recycling, parking, abandoned vehicles and I was even involved in trying to work out a land title problem between neighbours which was over 40 years old.

Hat tip pic Adam of Julieanne, John and John "on the knocker".
Posted by John Gray at Saturday, February 09, 2013