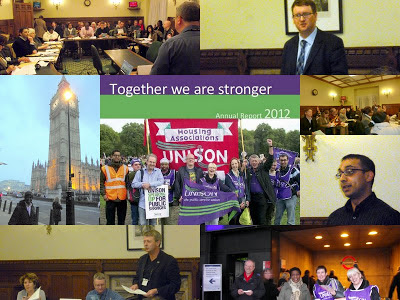 On Tuesday evening it was my branch Annual General Meeting. Which took place this year at the House of Commons. Thanks to our keynote speaker (and his staff), Shadow Pension minister, Gregg McClymont MP (see top right).

The AGM was very successful with the best turnout I have seen since I joined the branch in 2008.

There were lots of members present who have never been to a trade union meeting before. Hopefully we didn't scare them off and they will return!

On the way into the House of Commons members of the branch gave out "Love Trains, Hate High Fares" postcards to commuters outside Westminster station.

I had been re-elected unopposed as Branch Secretary as was the Chair, Tony Power.

It was a traditional Labour movement annual meeting with introductions; apologies; minutes: meeting; matters arising; branch officers making verbal reports and taking questions on the running of the branch; elections to vacant posts and conferences; rules changes; motions and affiliations.

There was some very good debates and contributions made during the motions and rule changes.

There is a very serious side of an AGM, since we have nearly 3500 members to defend in the worse of times and a budget of nearly £250,000 to account for to these members.

After the meeting, there was a less serious side, as we continued to put our world to rights and went to the branch social in the nearby "The Lord Moon of the Mall".

I'll post on Gregg's well received speech on pensions, my reports and the motions over the next week or so.
Posted by John Gray at Thursday, February 14, 2013

how many people turned out to hear the inspirational speeches?

I think 39 signed the register and a few visitors. Gregg's speech was very good and about an vital topic. I will write up when I get a mo.

The best "speeches" or contributions were from members who I have never seen at meetings before, who spoke on the motions.