Galloway the Ego slithers back to the East End 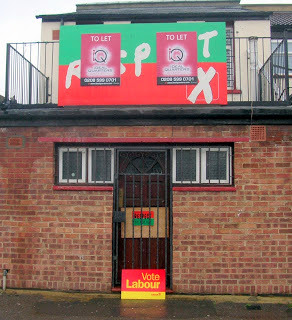 So Gorgeous George Galloway and his creature Diss-Respect is back in Newham, busy trying to stir up division and discord  in our community.

Jumping on any bandwagon they can, less than 3 years since this unlikely alliance of Muslim religious conservatives and extremist revolutionary atheists  were kicked out of East London, they are back with more of their nonsense.

Diss-Respect is trying to inflame concern about the recent refusal of a planning application for a large mosque in Abbey Mills, E15.

Galloway has taken time off from sucking up to murderous dictators, rape suspects and despotic regimes to claim if it had been a Catholic or Jewish church, then it would have been given permission. The only reason according to him, it was turned down was that it was "by... Muslims".

This is a completely untrue and also in my view a despicable statement to make. Even the worse sort of carpetbagger must realise that such baseless, inflammatory comments are shameful and potentially incite hatred.

Galloway calls for Newham Labour Mayor Robin Wales "to resign" over the turning down of the current application.

Why?  Robin Wales played no part in the planning committee decision. It was made by Newham Councillors. You cannot "whip" Councillors on planning decisions.  They make their own minds up on the merits of the application within planning law.

Robin Wales was re-elected as Newham Mayor in May 2010 with 68% of the vote. One of biggest majorities in the country on the same day that Galloway was humiliated and thrown out as a MP of next door Tower Hamlets.

Boris Johnson, the Tory Mayor of London has also turned down this application. Although I would be more than happy for Boris to resign, why hasn't Galloway called for his resignation as well?

Doesn't Galloway realise how stupid he and anyone else looks calling for anyone to resign when there is no legal or any other basis whatsoever to do so?

Newham is an imperfect but still successful multicultural and diverse community.  One key thing that all right thinking people agree upon and value is the rule of law in this country. I personally fully support the idea of a beautiful, signature mosque and religious facilities for this site, but it must fully comply with planning law. No ifs and no buts.

Galloway has also been spouting on about how he is going to run a petition on a debate in the House of Commons on this issue. Galloway is one maverick MP out of 650. The rest of MPs quite rightly mostly despise him and will not pay the slightest attention to anything he says or does.

Picture above is of the former Newham Respect headquarters "To Let".

Was n't Galloway one of "your" fomer Labour colleagues?.

Here is a video of another Labour MP:

Err...yes anon, until he was thrown out of the Party for his appalling behaviour?

...and the video of former MP Shahid Malik? Ignoring his hyperbole and the selective editing, what is wrong with anyone calling for their faith to be properly represented in Parliament or for eventually a Prime Minster "who happens to share my faith"?

Britain is in many ways still an unequal and unfair society.

Think about it(I know it is difficult for you people), has there ever been a serving British Prime Minster who was a Roman Catholic or Jewish?

I assume from the link you are one of the idiotic racist bigots who don't want any Mosques anywhere.

What a pile of rubbish this article is, irony is lost on labour. I many really lost on them.

rubbish it may be anon but at least it's not gibberish.

Put your teeth before you type next time! :)

Update: it would appear from his trolling on twitter that gibberish anon above is the potty mouth Newham Respect!