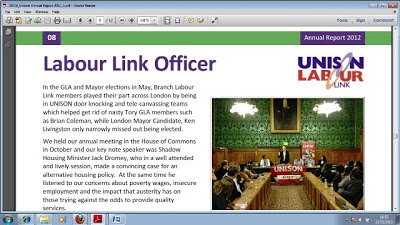 
"In the GLA and Mayor elections in May, Branch Labour Link members played their part across London by being in UNISON door knocking and tele-canvassing teams which helped get rid of nasty Tory GLA members such as Brian Coleman, while London Mayor Candidate, Ken Livingston only narrowly missed out being elected.

We held our annual meeting in the House of Commons in October and our key note speaker was Shadow Housing Minister Jack Dromey (see picture), who in a well attended and lively session, made a convincing case for an alternative housing policy.  At the same time he listened to our concerns about poverty wages, insecure employment and the impact that austerity has on those trying against the odds to provide quality services.

He overstayed the Q&A by 40 minutes and let one of our major employers, who also had an appointment that evening waiting for him.

In 2013 we need to exercise our local and national political muscle to support our campaigns to not only save our jobs, pensions and pay but argue for different ways of doing things. For example sector wide collective pay agreements;  for a living wage plus (decent pay, pensions and sickness benefit) for all housing and care workers and no public sector contracts for employers who do not  recognise trade unions.

Those of us who support the Labour Party need to play our part in making sure that a Labour Government is elected in 2015 and that it is a truly progressive Government with an alternative economic policy that will transform our society.