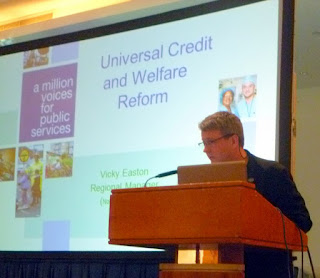 This is my speech to the UNISON London Regional Council AGM yesterday moving motion 3 on behalf of my branch.

Council, for years we in this union, the biggest union representing those who work in the sector, have warned of a crisis in housing. Our fears were largely ignored.

Council, this crisis is now an emergency and I think every single one of you in this room knows it and many of you indeed suffer from it, while all of you, will know victims of this housing emergency and the suffering they endure.

This motion calls for affordable; safe; adequate and secure housing for all.  Lets know look at what this means and the reality that our members, their families and friends now face.

First affordability of housing:Not only are house prices out of reach for the many, but even if our members can afford to buy, they cannot get a mortgage, because they cannot afford the 25% deposits, often needed for a decent rate. The average deposit in London for 1st time buyers in £66k . How can workers on low incomes, who often haven’t had a pay rise in years save £66k deposit, on top of all the other costs of buying a home?

Recent research by UNISON has found that we have far members living in private rented housing than social housing.  Even if you have a reasonable income you cannot save for a deposit for a mortgage because private rents are so sky high. The median rent for a 2-bed flat in Greater London is £288 per week. I repeat a 2-bed flat costs £288 per week. Many of our members on minimum wage or even living wage don’t earn that much in a week

While this Tory led government has announced that Social Housing target rents in the future will now be set at 80% of Market rents.

Safe: We have in this country criminal and gangster Rachman landlords who prey on vulnerable tenants. They enforce their conditions of tenancy with the baseball bat.

Adequate: We still have huge overcrowding in London. We have in many boroughs, the scandal of beds in sheds of landlord gardens. In many households there is nowhere for kids to do their homework, teenage brothers and sisters have to share bedrooms;

Secure: This government is doing away with security of tenure for tenants. The homeless have had the right to secure tenancies removed; new tenants will face fixed term not lifelong tenancies; while private tenants, whose rents are above local area housing allowances are being thrown out by their landlords.

All tenants who rely on housing benefit in the private and public sector face eviction due to the benefit cap and spare bedroom tax.  Which will mean UNISON members who like me, work in Councils and housing associations, will be expected to go to court and evict tenants who have one bedroom "too much", people who have lived there all their lives and may have been exemplary residents.

The answer: A mass house building programme. In London there are huge amounts of Brownfield land with planning permission to build homes but what we don’t have is the money, the investment.

Yet construction has seen the greatest decline in recent years and is this decline is dragging down our Economy and our GDP. Despite huge numbers of unemployed building workers being paid to stay at home on the dole, instead of making homes and paying taxes and having wages to buy services and create demand and create further jobs.

We need to license and regulate all landlords. Private and public sector. Get rid of the gangsters; get democratically elected and accountable worker and resident representatives on Housing Association Boards.

Rents must be fair to tenants and landlords. Why is it that in much of the world such as Communist USA, revolutionary Switzerland and Red Germany, they have regulation and rent controls but in UK  rent controls is somehow a “dirty word”.

Council, we need to stop this class cleansing of poor people, we do not want in this country, an outer belt of extreme poverty and deprivation on the outskirts of our more prosperous cities. This is a recipe for turning an emergency into a disaster.

Council please support this motion. I move.(it was passed by Council and will find out tomorrow if it was selected as one of the two regional motions to UNISON National Conference).
Posted by John Gray at Thursday, February 07, 2013