Labour Party vision for the Voluntary and Community sector 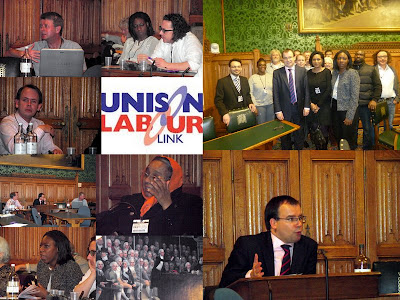 Guest post by Jonathan Slater, UNISON Labour Link officer for the London Voluntary Organisations Branch on the Link meeting last week at the House of Commons with Shadow Minster for our Sector Gareth Thomas MP.

"As a Labour Party and UNISON member who works in the charity sector, where I represent the needs of voluntary and community sector in Lewisham, I have long wanted to hear the Labour Party’s response to the ‘Big Society’ agenda of the Coalition Government, which for many in the sector has become toxic with the enforced cuts and experiences of charities taking part in the work programme where they were used as ‘bid candy’ by private sector organisations, as well as gagged from going public about its failures.

When I got elected last year as the Labour Link Officer for UNISON’s Community and Voluntary Organisation Branch which represents members who work in charities across London and who pay the political affiliation, I was very keen to bring them together to hear what the Labour Party’s position was nationally on the voluntary and community sector.

Therefore I invited Labour’s spokesman on civil society and also Chair of the Co-operative Party Gareth Thomas MP to address my members on Tuesday 29th January in Westminster. In his speech to my members he mentioned the increased demands of charities in supporting the most vulnerable members of our communities through the welfare changes, which include the important role they had to play in campaigning for them which makes them distinctive such as the Child Poverty Action Group, regardless of whether they are in receipt of public funds.

Also he highlighted that the current 160,000 charities are under huge financial pressure because of the enforced cuts by the Coalition where according to Charity Commission figures 7,394 charities shut down last year where they are suffering a triple hit with cuts of over 45 per cent in central government funding, local councils being forced to cut their VCS budgets, and a significant reduction in donations from the hard-pressed public.

According to the National Council of Voluntary Organisations recently estimated government cuts to the sector at £3.3bn by 2015. Gareth also touched upon the empty rhetoric of the Big Society where the Coalition Government has talked up the opportunities for charities to win contracts to provide government services. In reality he said it appeared that many charities are not able to compete on a level playing field with bigger private sector businesses able to take on more risk when they bid for the same contracts such as the work programme.

In terms of Labour’s approach procurement would be designed in a better way to allow smaller charities to bid for public services where if awarded them wouldn’t be publicly gagged. A particular focus though would be on legislated to require banks to reveal where they lend to community organisations and those who don’t compelling them to lend to local financial organisations which benefits the community based on the Community Reinvestment Act passed in the United States. The Act encourages commercial banks and savings associations there to help meet the needs of borrowers in all segments of their communities, including low- and moderate-income neighbourhoods.

Finally Gareth said Labour would enforce the living wage across the board. Despite this he encouraged charities to look to become social enterprises which were more financial sustainable where they wouldn’t be reliant on central or local government, where when Labour is returned to government in 2015 they will be facing much more challenging economic circumstances than in 1997.

The other speaker was John Gray, who is the Community representative on UNISON’s National Executive Committee, who talked about the importance of members who pay the political levy to become active in the Labour Party as activists and to stand as local Councillors and MPs in order to argue and campaign against Austerity, both at a national and local level, as well as for decent pay and conditions.

John also argued that employers who don’t recognise trade union shouldn’t have access to public funds and for businesses to have worker representation on their boards. Finally he urged Gareth to think about moving towards sectoral pay panels, particularly those for low paid workers.

Overall I felt this event was not only positive in bringing my members together where we can start to campaign for some of the issues highlighted at the event as well as against the austerity cuts but also to know that the Labour Party are the best option for the voluntary and community sector in being able to deliver public services on behalf of the communities they represent. At the same time the sector need to appreciate that the economic circumstances will be challenging in 2015 and therefore need to find other non-public sources of funding to become more sustainable and independent for the future.

(afterwards we had a social in the Weatherspoons in Whitehall. I will post my speech sometime soon)
Posted by John Gray at Tuesday, February 05, 2013