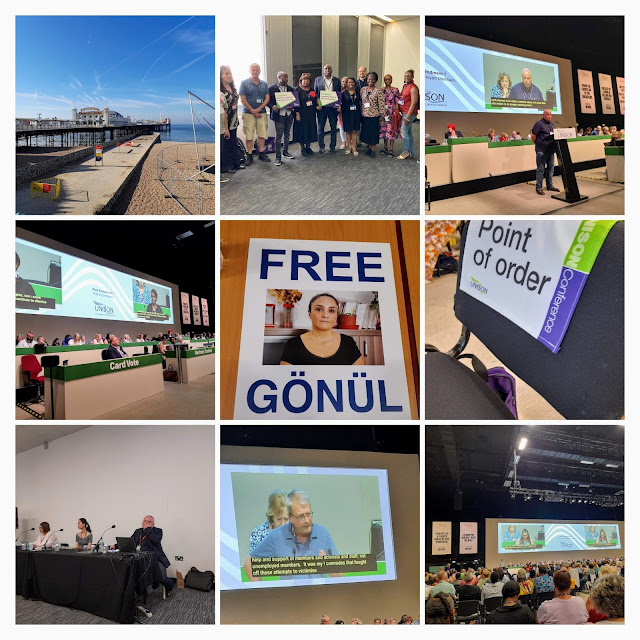 This morning I started the day with another slow jog along the Brighton beach front. During breakfast at the hotel my branch delegation agreed which 6 motions that we want to be "prioritised" for debate on Friday afternoon (the infamous UNISON "snake" - please don't ask me to explain what it is).

Conference started with a Solidarity photo call in support of Turkish trade union leader, Gonul Erden followed by an address by Mehmet Bozgeyik, co-president of KESK. After further debates on motions, Patricia King, General Secretary of the Irish Congress of Trade Unions gave a video message.

During lunch I attended a very good fringe on health and safety. First a comprehensive report and presentation by Scott Donohoe from UNISON  Scotland on their Covid-19 Response then a fascinating academic report on the effectiveness of safety reps by Minjie Cai from University of Greenwich. A great fringe which had very practical solutions for union reps followed by some well researched blue sky thinking.

Thursday afternoons at UNISON conference is set aside for debate on proposed rule changes. Normally a poorly attended and often pretty boring session. Not today.

I spoke on the rule change 1 which was about whether conference could trust the current NEC to allow unemployed members to retain their unison positions. Clearly in light of the overwhelming decision on motion 11 that conference has no confidence in the NEC. We cannot trust them. The amendment was passed but there was a card vote and this failed to reach the 2/3 majority needed.

However, Rule Change 2 was passed by more than 90% of delegates (so no card vote needed). Which meant that if someone is dismissed due to discrimination then the NEC would not be allowed to give that honour to them. Of course if someone is cleared on appeal then their position would be reinstated.

I did point out in my speech that if my branch met and and passed a vote of no confidence in its executive, we would of course all resign and there should be fresh elections. Why hasn't out NEC resigned yet? Isn't Conference supposed to be "Sovereign" in our union?