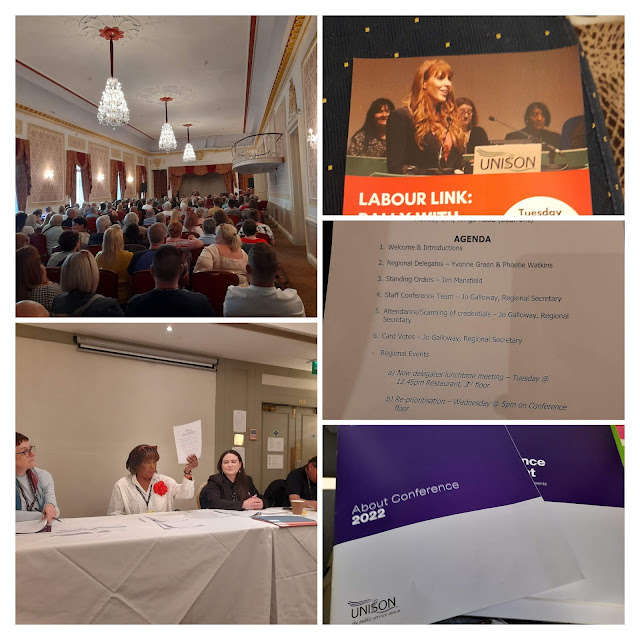 This evening UNISON National Delegate conference 2022 in Brighton started off with Regional briefings for delegates and visitors. Greater London met in the Holiday Inn chaired by our ace Regional Conveyor Yvonne Green. Our new Regional Secretary, Jo Galloway was also on the top table.
I gave a plug at the end of meeting for the Labour Link fringe tomorrow with Angela Rayner MP (and offered to have a chat on motions to anyone who asks)
After the briefing I went to the packed "Kirklees 15" fringe (see top left) where hundreds of delegates listened to the frankly appalling accounts of alleged bullying and harassment of mostly female UNISON members and branch employed staff by our current lay president.
It was one of the most powerful campaign meetings I have ever attended.  Despite some grandstanding and point scoring by those who should know better (nuff said), it is clear that the failure to even investigate, the so many complaints of bullying, harassment and threats of violence by our so called "President" is a disgrace and brings UNISON into disrepute.
This is someone who has been sacked by his employer for bullying, harassment and threats of violence on the evidence of UNISON members and UNISON branch employed staff. Incredible.
Tomorrow is the start of conference and as a branch delegate I look forward to taking part in debates but also more than happy to help and assist anyone with speech writing, practices etc.
Posted by John Gray at Monday, June 13, 2022