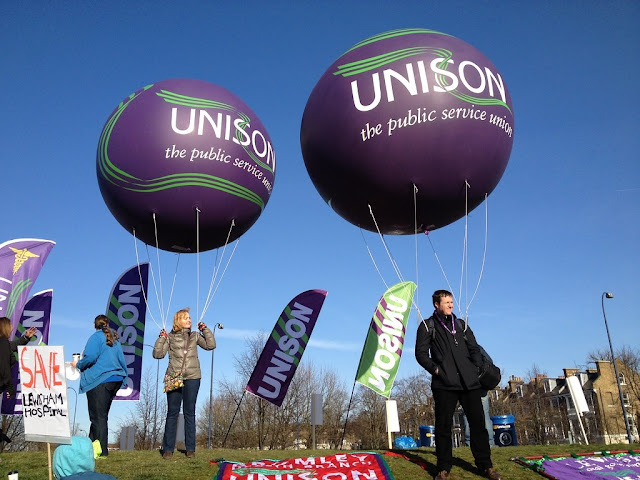 Hat tip the Social Review website. While they have got some things wrong and don't really understand the existential threat to UNISON from its current majority NEC -  but apart from that it's worth a read.
To find out what really happened at Conference check out past posts on this blog!

"UNISON, the largest trade union in the country, recently held its annual delegate conference (14th to 17th of June). This is supposed to be the supreme decision-making body of the union where policy and rules are decided as voted on by delegates from UNISON’s local branches. But it was clouded by the infighting that has grown to engulf the union.

Away from the infighting, there were some eye-catching declarations at UNISON’s conference. The largest women’s organisation in the UK voted to end support for the Nordic Model and expand support for trans equality. What these will look like in practice is less clear. As well as this, people who only see trade unions through the lens of the Labour Party will have been heartened by UNISON voting to support Proportional Representation (although it did not specify which form). This means that Unite and UNISON are now both in favour of supporting PR and its likelihood of passing at the Labour Party conference in September has greatly increased.

However, the most significant part of the conference was the continued internal battle on UNISON’s National Executive Council. As was demonstrated by motions 10 and 11 (both entitled ‘Not in Our Name’) passed. Motion 10 essentially reversed changes that the NEC (controlled by the faction Time For Real Change) had attempted to make to the balance of powers between the general secretary and the NEC and essentially established that the NEC’s capacity to change how the union operates is limited and that conference is the supreme decision-making body of the union. Motion 11 was a vote of no confidence in the NEC and was eventually passed by a card vote with a winning margin of 63%.

There is nothing in UNISON’s rule book that states what should happen if the conference declares that it has no confidence in the NEC. For the sake of clarity, it would have been sensible for a branch to prepare a rule change motion outlining what should happen in this eventuality. As a result of these votes, there were considerable divisions on the NEC. Some (those not in the TFRC faction) felt that the only recourse was for the whole NEC to resign and stand for election again, this was put to a vote on the NEC but it was defeated by the votes of the majority TFRC, whose actions had resulted in conference expressing no confidence in the NEC in the first place. There was also at least one alternative statement prepared by the NEC which appeared to more directly engage with motions 10 and 11.

Instead, the statement that was released recognised Conference’s sovereignty but argued that as all the other motions passed at conference required a functioning NEC, it would be necessary for the NEC to continue operating in order to fulfil its function and deliver on these motions while striving to regain the confidence of the membership. The public reading of this statement by the NEC resulted in a mass exodus by many members from the conference hall, though Conference managed to remain quorate, and presumably conscious.

Adding to the drama was the fact that conference also passed a rule amendment that means that unemployed members who were dismissed from employment due to “Any act of discrimination or harassment” from holding a seat on the NEC. The consequence of this is that UNISON’s now former president Paul Holmes of the TFRC faction (he was replaced as of Friday by Andrea Egan, also of TFRC) can no longer sit on the NEC or hold the office of President.

UNISON continues to be beset by infighting and, rather than providing resolutions, conference appears to have further inflamed the situation. UNISON is now in a situation where its NEC does not have the confidence of its sovereign body, a large proportion of NEC think the entire NEC should resign, and the infighting at the executive level has not been resolved. It’s currently unclear how this infighting will end (delegates may get the joy of having the same battles at next year’s conference), but what is clear is that UNISON’s 1.3 million members deserve better".