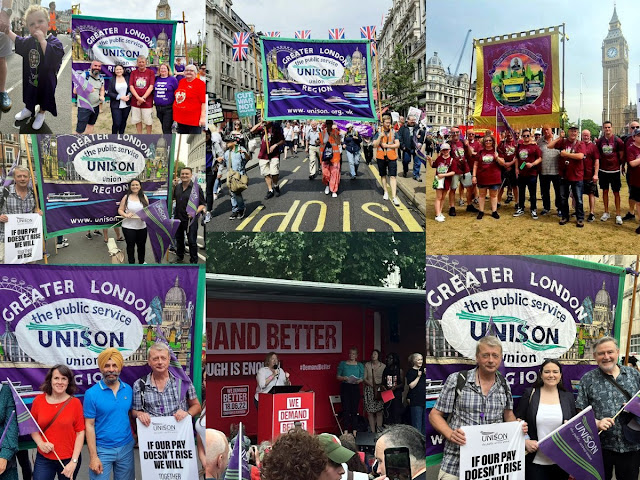 No rest for the wicked -  first day back from 4 day UNISON National conference at Brighton, I went up to join the TUC March and Rally https://www.unison.org.uk/events/tuc-national-demonstration/ in London demanding action on the cost of living crisis.

We began forming up in Portland Place (outside the BBC studio) for 10.30am then started off at 12 (on time for a change). This was the first big national "march and rally" I had been on in 3 years due to Covid. It was great to meet activists and staff who I have not seen in person for so long. Obviously there was many of us there as well who had spend the previous week locked up in the huge shed that is the Brighton Conference centre.

We marched down to Trafalgar Square then along Whitehall (past you know who's address) and into Parliament Square for a rally.

You can tell from the photo college that at some stage I had a new tee-shirt courtesy of UNSION London Ambulance Service, remembering the late and much lamented former UNISON President, Eric Roberts.

As a UNISON Greater London Regional Council Officer, I joined our new Regional Secretary, Jo Galloway and the London team and helped out carrying the Regional banner. Which was a handful at times in the wind.

It was fantastic that we got so many members coming up to us to wish us luck and offer support including Shadow Secretory of  State for Health, Wes Streeting MP,  Barry Gardiner MP and Leader of Redbridge Council (as well as Chair of LGA Labour Group), Cllr Jas Athwal.

I was pleased also to see Rachel Blake (see photo bottom left), who as Chair of London Labour Link following a selection process with our vice chair Yvonne Green, we recently endorsed as a London Labour Link early nominee for the Parliamentary seat in Cities of London & Westminster. Good luck Rachel in this process since we need people like you to stand and win seats for Labour.

While carrying the Regional banner, I had a number of conversations with various activists who for some reason were interested in the nomination process.

We finished in Parliament Square where there was a rally which included a brilliant contribution from our General Secretary Christina McAnea “The people holding the hands of dying patients were our members, while the Tories were partying in Downing Street”

Today I saw my union at its very best. I hope that from tomorrow onwards, those who profess that they want the union to succeed and keep us united will do the right thing. Nuf said after a great day.