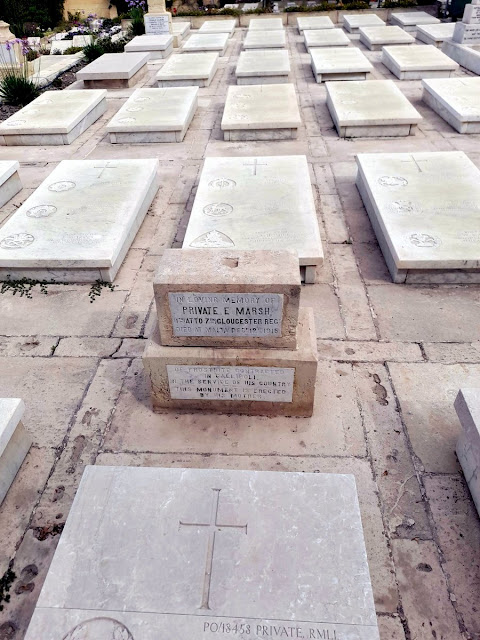 Last week I was in Malta on holiday with Gill staying in a rented house in Pieta, a suburb of the capital Valletta. I will post another time on what a truly wonderful place Malta is to visit.

By coincidence, just across the road from where we were staying was a Commonwealth War Graves cemetery.  Wherever I go, I always try to go and show my respects to these graves.

The cemetery was as usual, kept in immaculate condition and walking along the graves and reading the inscriptions. There were many very sad and moving stories about so many young victims of the first and second world war, who were buried here and those who died in accidents or illnesses during the interwar garrison years.

I was struck by one memorial to Private E (Edwin) Marsh (see main picture) from the 7th Gloucester Regiment who "died in Malta on Dec 12 1915 from Frost Bite contracted in Gallipoli in the service of his country. This monument is erected by his mother".

My maternal Grandfather (Taid in Welsh) Frederick Matthews, was also from South Wales (he was a  steel worker) and fought in Gallipoli (Royal Naval Division) and I knew from military records that he had been evacuated from that front to a hospital in Malta on Jan 1 1916 suffering from frost bite to his feet. Malta at the time was turned into a vast military hospital for all the many wounded from Gallipoli.

He was lucky and survived and when he eventually returned to fight with his unit in mainland France, he was awarded on 10 June 2017 a Military Cross for "conspicuous gallantry" by attacking enemy positions and capturing prisoners. Incredibly he survived the whole war.

These sort of things must make you be conscious of the role of chance or luck in life. It could have been Edwin who survived the frost bite and Fred who didn't. In such case I would not be here and there is a tiny probable chance that Edwin's Grandson, could have come on holiday and also pondered on Fred's grave in Pieta.