Support the Kirklees 15 at UNISON conference - Believe women & how can we allow allegations of bullying & harassment to be not even investigated??? 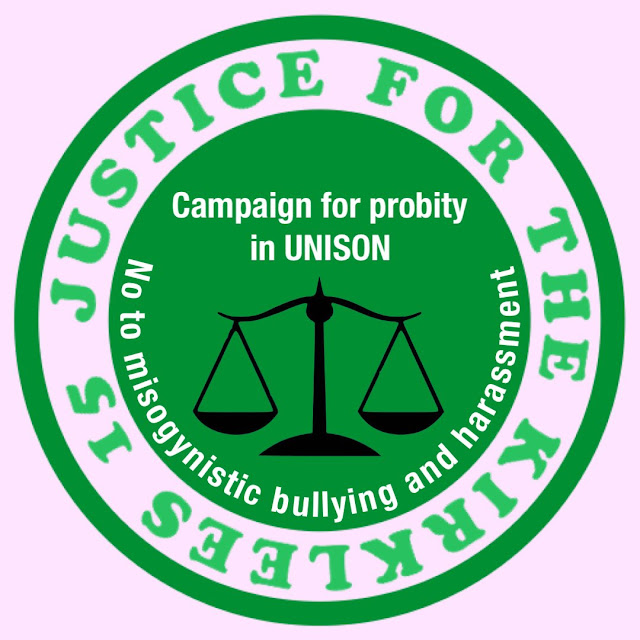 This is incredible and a shameful stain on our union but 15 UNISON members (14 women and 1 man) have made complaints of bullying and harassment against the current lay President of UNISON. This includes threats of violence. This man has since been dismissed by his employer because of these complaints but the UNISON NEC have decided to not only ignore longstanding rules that unemployed members cannot stand for such offices but have also decided to drop all charges against him. See what the Kirklees 15 say about this and lets support them at NDC conference.

"We have seen some branches have passed this Emergency Motion to Conference which of course we fully support. It will have to go through the process of Standing orders to see if it will be allowed onto the Agenda of Conference.

Emergency motion for UNISON conference
This conference opposes the decision of the March 15 meeting of the National
Executive Council to summarily dismiss the serious complaints made against the President of the union by 15 union members and branch office staff without any explanation or reasons given.
Disgracefully, while the complaints were first received by the national union in 2019 (whilst Dave Prentis was still General Secretary) - over two and a half years later the complainants still do not know how the union investigation assessed the issues that they raised and now, on what basis that they were dismissed.
Regardless of the contestability or otherwise of the outcome of the parallel process of the disciplinary action taken by Kirklees council against the President our union must be seen to take allegations of bullying and intimidatory behaviour seriously and reach its own independent conclusions on whether the allegations have substance and how the union should respond.
Unison’s own investigation officer stated that there was ‘a case to answer’ and that an internal Unison disciplinary hearing should take place, which was also supported by the Lay Chair of the NEC committee which deals with union disciplinaries.
We call on the NEC to re-open the investigation to give the opportunity both to the complainants to make their case and to the President to defend his position and for both sides to be given full access to its results.
Posted by John Gray at Friday, June 03, 2022