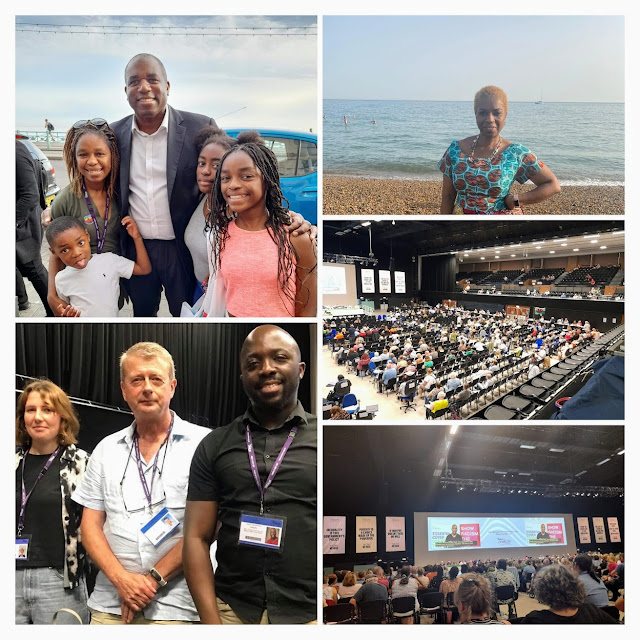 Last day of UNISON National Delegate Conference was as dramatic as the previous 3 days. I did not have time for a run this morning as had to pack and check out of hotel and place my suitcase in conference centre before 9.30am.

Yesterday we had been promised by the UNISON Presidential team that the NEC would respond to the many complaints that they and the Standing Order Committee (SOC) had received about why they had not resigned or even responded to the overwhelming "No confidence" vote about them, that had taken place on Tuesday. I and many others had been asking what on earth is happening.

It had been put on the agenda in the SOC report for this morning as first item (Emergency Motion 6) . However, the Vice President announced that the NEC had not yet discussed the fact that the conference they were chairing had no confidence in them but would agree a statement during their lunch time break today (bless 'em).

So we continued with conference business with a marvellous video by Shaka Hislop, about UNISON support for "Show Racism the Red Card" followed by other motions.

During lunch I went with my branch delegates (apart from you know who JO!) for traditional Fish N Chips & Mushy peas at the Regency café,

After lunch at we restarted conference at 2pm but there was still no statement. Eventually a statement was read out by the Vice President, that said basically the NEC were very sorry to have upset any one, they have leant some lessons but they don't really care about the no confidence vote and will continue as usual.

This caused up roar at conference with many delegates walking out and a rush of people to raise points of order. I happened to be first because I was genuinely curious how the Vice President would rule how conference delegates could question the NDC on this statement. Other delegates spoke about how angry and disgusted they were at this statement and tried to reference the statement back. The Vice President completely ignored my point of order and all the others and carried on regardless, despite so many delegates packing up and leaving conference.

Conference business carried on and at the 3.45 official close there was a mass exist of delegates, as the so called "President" returned to the platform stage, despite Conference ruling he was ineligible to hold this office. One of his sycophants who was cheering him on had just previously screamed vile threatening abuse at one of the conference speakers. Of course nothing was said or done about this. I understand that complaints have been raised but again no one has any confidence that this NEC will do anything to protect delegates or anyone else if their political mates are in the frame.

I went home by rail to London and had a think about things on the journey. While I was pleased that Conference had stood up for up for itself and effectively challenged, what is in many views a frankly corrupted and dishonest NEC. I am still shocked at the blatant disregard of the majority NEC of basic labour movement democratic principles. You don't need to know chapter and verse to know that if you lose a vote of no confidence in elected office you must stand down.

If you don't you are acting in this regard, even worse than that monster Boris Johnson, who would have resigned if he had lost such a vote. How can we attack the Tories, when our majority NEC leadership are even worse unprincipled hypocrites then Boris? We surely do demand better.

I am now back in London and will be joining UNISON members at the TUC demo tomorrow (as long as I wake up in time!)

No trolling comments please. Will be deleted

thanks for the spell check but which part of the words "Strictly no trolls" (especially anonymous)don't you understand?