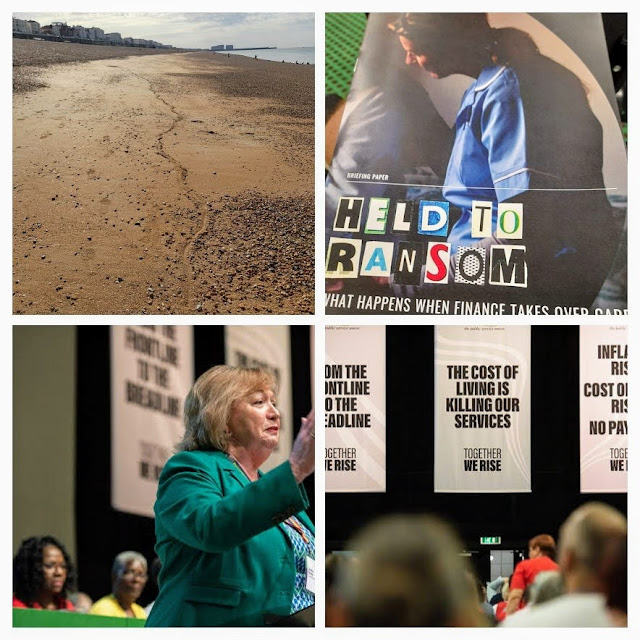 Day 2 (Wednesday) of Conference started fairly early for me, with a short slow jog in the sunshine along the beach and then back to my hotel. There were people swimming near the Pier and while bizarrely I managed to pack 2 different pairs of trunks (and no phone charger!) I doubt I will be brave enough to go for a dip but who knows.

There are 4 Greater London Housing Associations delegates (I am a sharer) in the hotel and the planned delegation meeting over breakfast didn't quite work out but since there did not appear to be anything that contentious today we agreed by WhatsApp to formally meet later if necessary.

The result of the card vote (where each delegation records how they voted in accordance to how many members they have) yesterday on motion 11 was overwhelming. There was a massive 655,809 votes in favour of the motion, which explicitly called a vote of "No Confidence in the NEC" over their outrageous rule breaking, trying to sack our elected first ever female General Secretary and their deliberate attempt to start a civil war in UNISON at a time we should be united to fight the Tories. This was about 63% of the total vote.

If the NEC had any basic trade union honour or principles, they should immediately resign after such a vote of "No confidence" about them at our sovereign decision making body, National Delegate Conference. We can then hold fresh elections. A UNISON NEC should not act as Boris Johnson Mark 2.

I am not holding my breath to be honest but hope I am wrong.

Next I tried to speak on motion 58 (Campaigning for a National Care Service) but got knocked off again by a point of order.

I had to leave conference floor to write speaker notes for our London regional motion on Pensions but came back for our General Secretary speech by Christina McAnea.

Her speech was fantastic and inspirational. We have an intelligent, experienced, capable working class woman as our General Secretary. Check out the YouTube video in previous post.

It is disgusting that she has been treated so badly by lets face it, fake left sexist bullies and harassers, who have tried to take legal action against her and even sack her.

Total respect to Christina for sharing with us that she was diagnosed with breast cancer in February this year which meant she had to cancel some meetings. She is now in remission and now totally up for the fight.

After her marvellous speech I swooped my badge with my sharer and went off to watch conference on the TV while typing speeches and doing stuff for work.

There were a number of excellent debates during the afternoon.

At close of conference, there was our traditional London region "huddle" to discuss which motions (out of the many) delegations think should be debated in the short time we have before end of conference. Delegations have a form to fill out by tomorrow morning.

After consultation with senior lay London activists I recommend:-

1. Motion 39 "Future Pension Provision" (which is the London Regional Motion)

2. EMC1 "Angela Rayner is Welcome at UNISON Conference" (which is our branch motion as well)

After close of conference I went to really important fringe on the what happens when Financial companies take over Care Homes. Christina was on the panel and gave a great speech. This issue is obviously important to her. I note that no one from the NEC turned up. Our NEC do not care about Care or Community issues it seems. Nuf said.