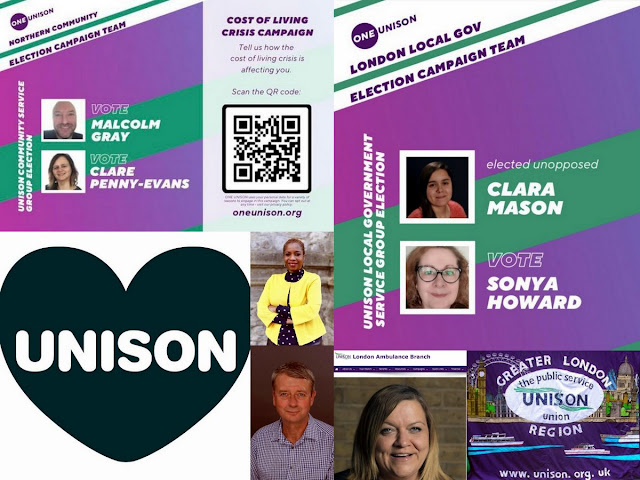 Yesterday I was really pleased to get an email from the elections office confirming that I had been elected unopposed to the UNISON Service Group Executive (SGE) for Greater London Community (alongside I believe the one and only, Lola Oyewusi).

I haven't done a proper reccie on the national results yet but I was delighted that Sonya Howard defeated a long standing tfrc incumbent to join Clara Mason, representing London on the Local Government SGE. Also, London Ambulance Service, Julie Cunnane, will be there for London Health.

Also, in the only contested Community election, our SGE Chair Malcolm Gray (no known family connection but coincidentally, he is also known to like an occasional beer and a curry) and Clare Penny-Evans, fought off tfrc extremist candidates to win both seats in Northern region.

Looking forward to UNISON National Delegate conference next week in Brighton (Monday evening to Friday). Should be very interesting.

I will try to blog as much as possible but for the first time in 11 years, I will be an active branch delegate (not there as a NEC member, mostly sitting on the conference pedestal trying to look interested) so will be busy writing speeches, trying to speak, organising and supporting delegates.