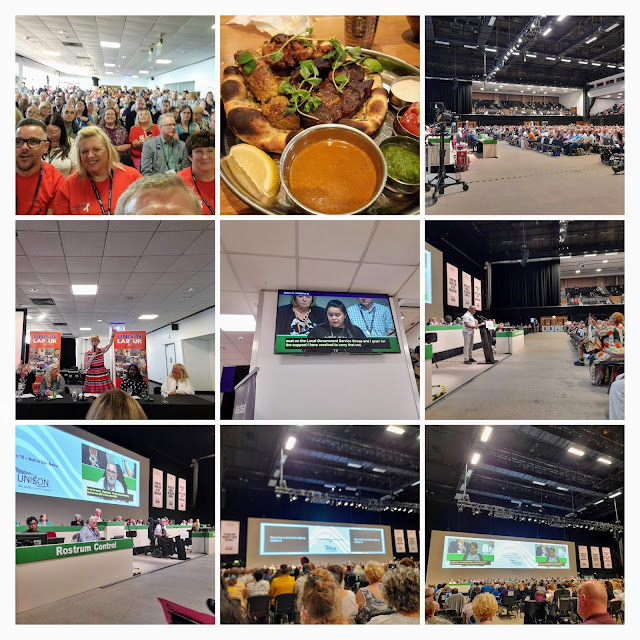 A busy first day of UNISON conference in Brighton. I managed to go for a short slow jog along the prom this morning. It was a beautiful sunny morning.

Conference was supposed to start at 10am but started late. I was expecting some trouble about the Standing Order Committee (SOC) reports but attempts by the majority NEC to "reference back" (reject their recommendations) the decisions of our independent SOC were decisively defeated by conference. I thought this was interesting and a good sign.

I am a "shared" branch delegate and then handed over to my "sharer" and largely missed the discussion on the annual report and financial statements. I did witness the huge row by so many delegates who walked out of the conference hall, amidst shouting and chanting, when the "President" gave his speech. This is due to the many complaints of misogyny, bullying and harassments by the #Kirkless15 against him. I have never seen such anger and disruption in my 25 years or so of attending UNISON conferences

After lunch there was massive debates on two "Not in our name"motions, which condemned the majority NEC not only for fragrant rule breaking but dividing our union by their divisive and sectarian actions. There was some fantastic contributions, in particular from colleagues in Northern Ireland who know what it is like to have intolerant bigots and extremists trying to gain power. I tried to speak on both debates but points of order that the "question be put" were passed before my turn to speak. Such is life but I will post my speeches.

After conference, there was a really packed UNISON Labour Link rally with keynote speaker Angela Rayner MP (deputy Leader of the Labour Party), Abena Oppong-Asare MP and our General Secretary Christina McAnea. Angela was on form and gave a marvelous and passionate speech about the importance of her UNISON family.

I am so pleased that my branch was one of many that have sent in an emergency motion to conference, condemning the Majority NEC for "banning" Angela from speaking at the main conference by their ultra far left extremists.

After a long day, some of our branch delegates went for a curry, followed by a walk along the Brighton Prom, enjoying the full moon across the water.

Nicely put John hope you managed to enjoy you time away after I so rudely interrupted it. Sharon

No problem whatsoever,. It was great to hear from you.