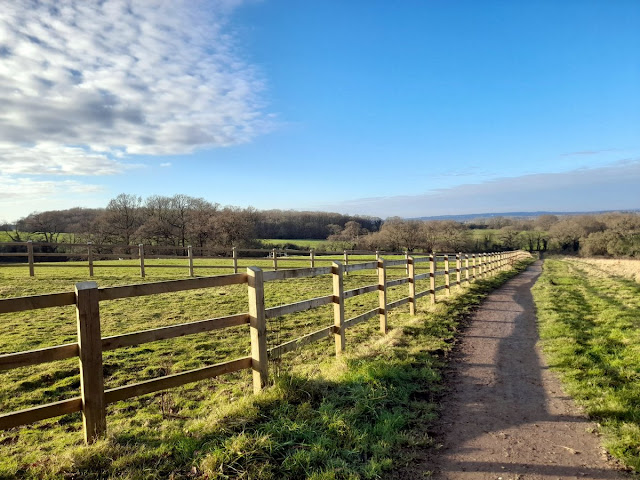 Gill and I went for a favourite walk in Essendon and Little Berkhamsted, Hertfordshire. Only 4.5 miles but lots of ups and downs with varied views. 45 Minutes by car (public transport access not great) from East London.
The walk is detailed in this Pathfinder guide. We started the walk next to the church in Essendon. In 1916 a bomb was dropped by a first world war Zeppelin Airship on the church killing two sisters aged 26 and 12 (daughters of the local blacksmith).
The weather was cold but the cloudy skies cleared and we had unexpected bright warm winter sunshine for most of the walk.
We soon came across a lonely albino wallaby in a woodland "conservation" enclosure, later we walked past greedy goats, suspicious llamas and very small donkey's.
Then we walked past Bedwell Park, which was the home of a former South African rebel Boer commando,  Deneys Reitz, who later fought for the Empire in World War One and commanded a British Army Battalion in the Western Front.
Former Conservative Cabinet member Reginald Maudling is buried in the lovely Little Berkhamsted Church.
You definitely need boots or wellies at this time of year, with lots of muddy paths and green lanes but nothing too difficult today.
Afterwards we had a drink in the "Rose and Crown" which is now more of a restaurant than pub. There are only a few tables for non diners. The food looked excellent but you need to book on a Sunday.
I will post more picture of this excellent walk on Facebook.
Posted by John Gray at Sunday, January 16, 2022