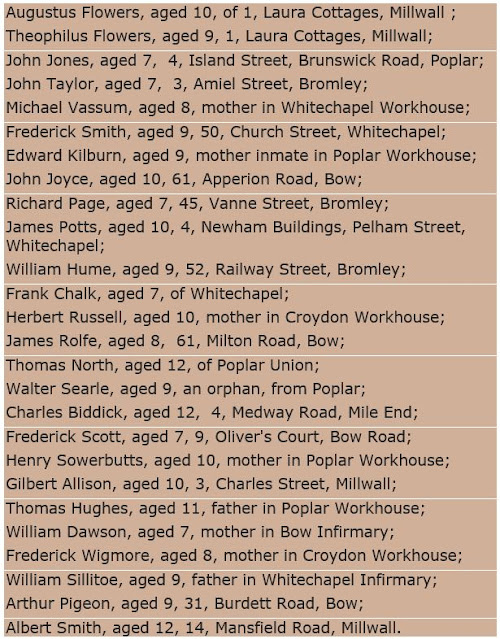 This morning a small group of Councillors and local historians met in West Ham Cemetery at the memorial to the 26 young boys (see below) who suffocated to death following a fire at the nearby children's Workhouse.

Author John Walker, who has written a recent book on the fire and the Workhouse "Out of Sight, Out of Mind -Abuse, Neglect and Fire in a London Children’s Workhouse, 1854 - 1907" read out the names and ages of the victims. In his book John  makes it clear who should have been held responsible for this "accident". "Although cleared by the inquest, the management was culpable: it had locked them in their dormitories, so the staff could celebrate the new year in, off site.

Many thanks also to local historian, Alan Regin MBE, who is a font of knowledge about the cemetery and is trying to locate the exact locations of the boys grave. Was this the one at Forest Gate industrial School? (later Forest Gate Hospital). The poor have always been seen as disposable. Even now rough sleepers, for example, are seen as collateral damage.

Yes, it is - 50,000 children are estimated to have been "placed" at the school. Yes, the poor have always been seen as disposable and you make a fair point about rough sleepers but the callous disregard for these young lives has truly shocked me. Only 3 years later there was yet another scandal involving rotten food poisoning - killing even more children.

> Was this the one at Forest Gate industrial School? (later Forest Gate Hospital). The poor have always been seen as disposable. Even now rough sleepers, for example, are seen as collateral damage.

Society has moved on and has learned the lessons from the past. I am glad we don't live in those times. Thanks should be given to those who fought for social reforms and could see the pain and suffering of others.

However, given that our cheap imports come from developing nations, we are enjoying a higher quality of life at their expense. In a globalised world, they don't have minimum wages or protection from unemployment or pensions.

Saying that, having faced with a lot of ASB issues and problem neighbours over many years. Almost all who have been on benefits, it has left me with a lot of unanswered questions. Why do they treat society badly, when they have been given a helping hand?. Can they not see their own cruelty and the misery they cause?

At the same time, I see low income families, where dad goes to work. Live in smaller accommodation (compared to those who get state assisted accommodation), yet cause no problem for their neighbours.....