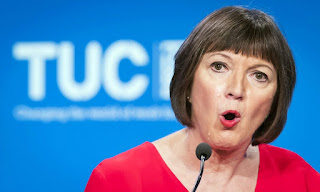 Check out this TUC report on the 90% decline of UK shareholding by UK Pension funds. Our UK companies are now largely owned by tax avoiders (or worse)

New research published today (Monday) by the TUC, Common Wealth, and High Pay Centre shows that UK workers get comparatively little benefit from share dividends – despite common claims that they do.

The report Do dividends pay our pensions? finds that the proportion of UK shares directly held by UK pension funds fell from almost one in three in 1990 to less than one in 25 by 2018 – a decline of over 90%.

Over this period, ownership of UK public companies shifted from UK pension funds to foreign owners and investors whose identities are often obscured by lax reporting rules.

The authors say that workers in UK listed firms deserve a clearer understanding of who now benefits from their labour, and how much is captured by a wealthy minority".

Check out for further info https://www.tuc.org.uk/news/uk-workers-pension-funds-now-own-just-6-uk-listed-shares

What evidence, is there that the rest is owned by tax avoiders and evaders?. It is a scandalous smearing.

We are a planet of 7 billion people. Anyone can buy UK stock. In the same way, I can buy stocks from any other country. It does n't make me tax cheat.

With an older population, I imagine most pensions would be cashing out buying annuities (or what ever pension companies do). That could explain one element.

> and away from the working people who create the wealth.

That is a odd statement. Does someone who work has a checkout girl, create wealth?. Or are they doing a job provided by someone. If all the workers are super talented, then why are there unemployed people in Stoke-on-trent waiting for the factories to re-open?

This is not to say wealth is created by CEO either. As they milking ever high salaries.

Frontline staff who provide rude to customers - do they create wealth?

If you had £10,000 and gave it to someone to invest. You would do so for a return on your investment. Should your money be used job creation creation scheme for workers?

There is no mention of responsibility about climate change.

When a company runs into trouble, the workers don't offer to work for free, to save the company.

I agree with the sentiment, worker should be respected and protected, but certainly not put on a pedestal about being wealth creators.