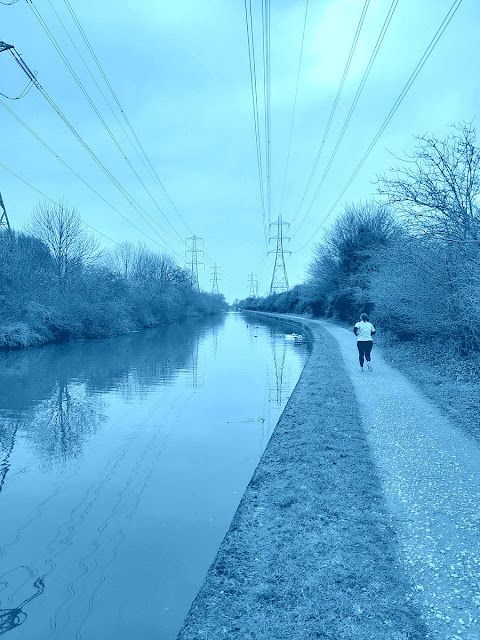 Off message. On Sunday, Gill and I took a train from Wanstead Park (Forest Gate). Changed at Blackhorse Road for Victoria line  then one stop until Tottenham Hale. A 10 minute walk from station to River Lea. Then simply go north along the waterway on west bank then cross over by bridge on east bank of river.

You go past sailing barges and numerous canal boats. Many of which are homes even in winter, with smoke coming out of their chimneys giving off Sunday roast cooking smells.

This is not a totally peaceful countryside river walk but despite going underneath some busy roads there are quiet and isolated stretches. Some annoying (male) cyclists go past, who think they are competing in the towpath Tour de France, but generally, everyone is polite and considerate.

We stopped off for coffee and watched a young squirrel misjudge a leap from tree to tree and fall into the water. S/he swam to the bank safely.

It was also interesting to see the sheep eating the grass on the various fresh water reservoirs that line this route.

We turned right along the A10 for about 15 minutes, just before KIng George's Reservoir towards Chingford before turning left then right into Pole Hill, Epping Forest. A nice climb to the top, past the pillar that mentions First World War soldier and author, TE Lawrence (Lawrence of Arabia) who lived in a hut on this hill for several years.

Walk downhill alongside the golf course towards our finishing point at Queen Elizabeth Hunting Lodge. A pleasant linear walk of about 7 miles. Nothing too difficult apart from slight climb up Pole Hill.

After which we had a pleasant Sunday roast dinner at the Royal Forest Hotel then took train back to Forest Gate.