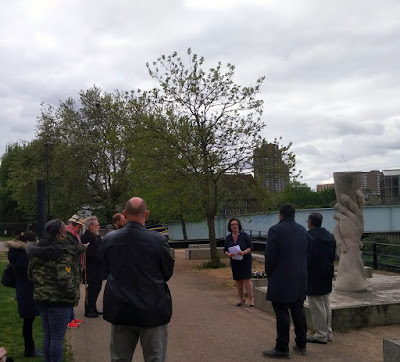 "Thanks so much to John for organising this as he does every year, and to everyone who has attended today. It is always a powerful demonstration of how much the labour movement and our heritage means to us today.

On Worker’s Memorial Day every year we resolve to remember the dead, and renew our fight for the living. Both of those resolutions are about standing in solidarity with workers and the labour movement across the islands we call home, and across the world. Today we celebrate the victories and sacrifices of the past, we relate events in the present to our history and our tradition, and we reflect on what we can do to build a world of safety, security, justice and prosperity for workers and our communities in the future.

Every year we gather at this place to remember the heroism of Godfrey Maule Nicholson, Frederick Elliot, and Robert Underhill, who died in the attempt to save their colleague Thomas Pickett from a tragic and entirely preventable death at work. Their instinct to help their colleagues led each of them in turn to fearlessly climb down into the well where Thomas Pickett had already succumbed to the gas. They could have waited, but they must have felt that if they did their fellow workers would certainly have died. Their solidarity was immediate, powerful, and inspiring, and their tragic deaths are so worthy of commemoration more than a century on.

Today is also about the present, and I’ve been thinking about Lyra McKee. We stand together with all who knew Lyra McKee through her work as a journalist or in the rest of her life and with the Derry Trades Union Council, who are putting her at the heart of their commemorations today. Lyra was one of the hundreds of thousands of people who are killed or injured just doing their jobs each year. I condemn her murder as a trade unionist and a member of the labour movement just as I condemn it as someone who is deeply concerned about preserving the hard-won peace in Northern Ireland.

Finally, today is about the future. It is about what we can recommit to do to increase safety for workers in the future:

· Joining a union and encouraging others to do likewise.

· Working for a solution to the Brexit crisis that ensures we won’t fall behind our fellow workers in the rest of Europe on health and safety, the environment we all live in, or our workers rights.

· And fighting for political change at all the different levels of government to put workers and people who will stand up for workers into power. We have local and European elections within the next month, and I’m hopeful with the May Government faltering we’ll have a General election soon as well.

We could soon have an opportunity to fight for a Ministry of Labour, for pro-union and pro-worker policies across the board, and for a Government who won’t see health and safety rules as red tape to be reduced but as essential protections and as ways that our solidarity is made permanent and effective, so workers like Lyra McKee, workers like Thomas Pickett, Robert Underhill, Frederick Elliot and Godfrey Nicholson will never be put at risk again".
Posted by John Gray at Sunday, April 28, 2019