View from my Ward 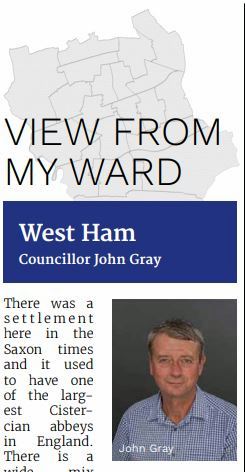 “There was a settlement here in the Saxon times and it used to have one of the largest Cistercian abbeys in England.

There is a wide mix of social housing, privately rented and home owners. Two of the best parks in East London, the Greenway path, 4 primary schools, a 6th form college and 4 railway stations (in or nearby).

There are a number of active community minded individuals and organisations, who have rallied together to help vulnerable residents during the Covid pandemics, with delivery of food parcels, shopping, picking up medication or offering other forms of support.

I have been privileged to be a Newham Councillor for the ward for the last past 10 years.

There are currently 20 wards in Newham. I am a Labour and Co-operative Party Councillor. In normal times we hold 6 face to face local surgeries for residents to meet us every month. We are now available online or on the phone.

While many residents think the ward is a great place to live and bring up their families there are problems.

The chief concern is one that dominates my Councillor case work is – housing. Not only homelessness, overcrowding or disrepair but especially poverty brought about by very high rents.

Some 66% of children in Newham live in poverty after their parents housing costs are taken into account.

Therefore a big issue in the ward is the proposal to build a school by the Government on the site of the former Ford’s motor show rooms in Plaistow Road. Great to have a new school but it is proposed only a tiny number of truly affordable socially homes will be built on this site while many for sale on the open market. Local Councillors & residents are firmly opposed to such plans. Watch this space”.