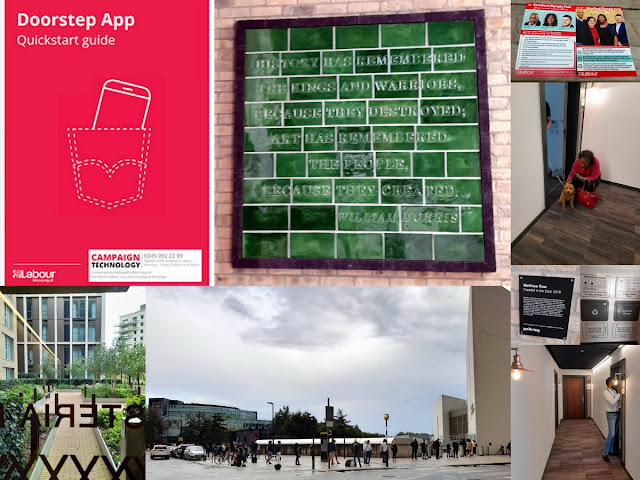 On Saturday I joined Labour Party colleagues to take part in a physical canvass of the Stratford E20 area (the site of the former 2012 London Olympic village). For the first time I was asked (or rather pushed) into leading a canvass team using the Labour Party "doorstep app" on my mobile phone. In the past we had paper sheets with details of names and addresses to call at to canvass on behalf of the Labour Party, now it can be done online via your mobile phone. It seemed to work very well and I hope the information we received on voting intentions was uploaded and saved to the national Party database.

I went with my colleague, Cllr Shaban Mohammed and former Councillor, Aleen Alarice.  We got a very good reception from residents who were overwhelmingly pleased that we were knocking on doors and asking them whether there are any local problems or issues they want us to raise.

While cycling home I passed a massive queue of mostly young people, waiting for their Covid jab despite the intermittent downpours that day. I thanked them as I went past.
Posted by John Gray at Wednesday, August 04, 2021

it was easier than I thought it was going to be but would have been a good idea to have been with someone who had led with it beforehand.