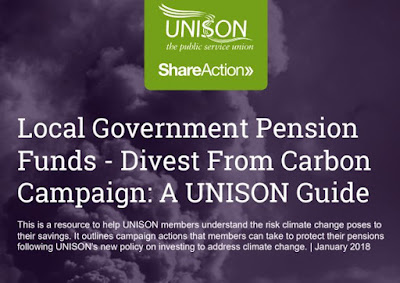 The "Divest Campaign" is potentially one of the most significant things we can do as a union, not only to save our planet but also to save our pensions future.

Will blog further on the seminar later.

A campaign to encourage local government pension funds to divest from carbon will be launched today (Wednesday) by UNISON.

UNISON’s step-by-step guide is designed to help members of local government pension schemes push for changes in the investment of their funds. The aim is to explore alternative investment opportunities, allowing schemes to sell their shares and bonds in fossil fuels and to go carbon-free.
Chair of UNISON’s policy committee James Anthony said: “Pensions are meant to safeguard our future, but that future is threatened by the burning of carbon in fossil fuels like coal, oil and gas.
“This campaign empowers people to hold their pension funds to account. If you contribute to a pension then it’s your money that’s being invested, and so it’s only right that you should have a say in where it’s invested.”
Figures published last year revealed that £16 billion was invested in the fossil fuel industry by local government pension funds*. At its annual conference last year, UNISON made the decision to campaign for divestment from these companies because of the devastating consequences that a changing climate will have on people, societies and ecosystems.
In addition to the threat of climate change, the UNISON campaign highlights other reasons why continued investment in carbon threatens the value of pension funds. For example, new government regulations for fossil fuels have raised the costs of high-polluting industries and reduced their investment appeal. Equally, emerging clean and green technology has created new and lucrative business opportunities for funds.
With five million members of local government pension schemes, and over 13,000 different employers paying into them, UNISON believes its campaign will resonate with a wide audience and is in a strong position to influence the pensions agenda".
Hat tip https://www.unison.org.uk/news/press-release/2018/01/unison-launches-campaign-divest-pensions-carbon/
Posted by John Gray at Thursday, January 11, 2018