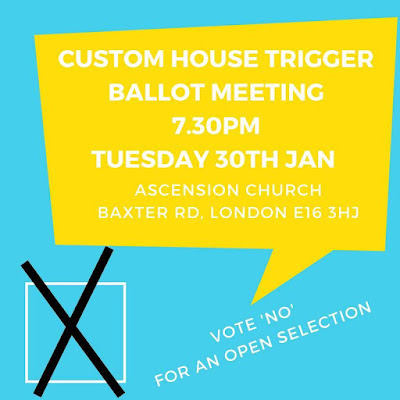 "If you are an eligible ward member (there is a "freeze" date, so if you were not a party member by 26 April 2016 and also living in the borough since 25 October 2016 you cannot vote) then you should have received an email or letter informing you of date, time, location and identity requirements.
I would suggest that you arrive at least 30 minutes early for registration and that the Party asks you to bring some form of ID with you such as your Labour Party membership card.
West Ham Labour Party Executive Committee is running its 10 ward trigger ballot meetings over the next 3 weeks (details to be published on this blog and others). Each ward will be given at least 7 days notice.
East Ham Labour Party ward trigger ballot meetings will all be run on the same day by London Regional Labour Party at the East Ham Town Hall E6 on Saturday 10 February. All eligible members should have got an email or letter from London Region.
You will not be able to attend and participate in these meetings if you are not eligible to vote or in arrears with your Party subscriptions (so get up to date!).
(To be clear, even though I am an Executive officer of West Ham CLP, I will not be taking part in the above process since I am openly calling for a NO vote and wish an open mayoral selection process).

After 24 years of one person being in charge it is about time that there was a democratic choice for Party members before making it 28 years. Please spread the word.
Posted by John Gray at Wednesday, January 24, 2018