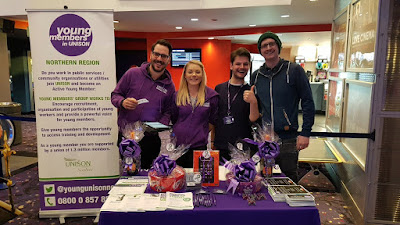 I have been meaning to post on this challenging but important article by Carl Roper on the TUC website Stronger Unions for a while. It is about the urgent need to recruit young union members and turn them into activists.

This is a critical issue for unions. Young members are our lifeblood. It is "do or die".

Recently UNISON has had some success in recruiting young members but not yet enough to make up for retiring activists.

I think the success of the Labour Party in recruiting young people in recent years must tell us something? Even though in my experience many of them have joined but not yet got active. The Party was written off as a mass movement yet has now some 570,000 full members (the largest political party in Western Europe)

There must be lessons for us somewhere? Changes in titles, rules, comms and digital media are important but it is also about the wider narrative – what is our our message to young people, what can we offer them and how do we deliver it?

At the risk of seeming negative I think that history tells us that unions need greater political protection and support in order to encourage membership and participation of all ages. That doesn't mean do nothing and just wait for a Labour Parliamentary victory.

Below are five suggestions by Carl with my thoughts below each.

1. Scrap traditional reps and activist job titles and descriptions and start again from the basis about what needs to be done. Titles like Chair and Secretary appear boring and administrative not proactive, action based roles that might motivate someone to get involved.

Yes/No. Titles should reflect what needs to be done but you need someone to "chair" a meeting. A "secretary" needs to take notes on what is decided at meetings. What new titles?

2. Introduce rep retirement ages so that reps step down from their union role 12/18 months before they retire from work and are tasked with finding and mentoring younger successors.

Good idea but I suspect that compulsory retirement for branch officers is probably unlawful. The problem will be if you cannot find anyone to take on the role. However, no one is irreplaceable (even me) and if meaningful succession planning is done properly it can be done.

3. Branch officers and reps should be employed at the company/organisation, which means ending the practice of retired members holding branch positions.

Agreed but retired members can be an important asset to a branch and are often overlooked. There is a more immediate problem with multi-employer branches where branch officers don't have facility time to represent members in other employers nor the inside knowledge.

4. Following on from the previous suggestion, unions should adopt and properly resource formal succession planning and mentoring strategies for new reps.

5. Unions should launch a digital revolution in unions that utilises tech and includes radically democratising how we identify issues and narrow the gap between the decision we make and the action we need to take.

As you would imagine,  I agree with this point but can we deliver this when the law means we can't even have Internet voting for many trade union elections? Still, we have no choice but to try, we need to take risks with technology and trust our members.

Picture of UNISON young members in our Northern region