"Newham mayor ‘trigger ballot’ to be re-run by Labour region" (and a possible new contender?) 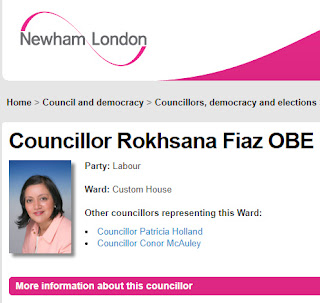 See post below from former Guardian Journalist Dave Hill on his "On London" website. I see that Dave mentions Cllr Rokhsana Fiaz, as a possible contender.

"The process which led to Sir Robin Wales being endorsed to seek a fifth term as Labour Mayor of Newham is to be re-run following claims by party members first made a year ago that a number of alleged irregularities had made “a material difference to the result”.

In an email sent out this evening, Neil Fleming, the acting regional director of the Greater London Labour Party, said the re-run had been “agreed” because the prospect of a court case to determine the dispute “would be costly to the party” and “a massive distraction” from the mayoral and council election campaigns to take place in May.

Just before Christmas Sir Robin made known through the Newham Recorder that he favoured Labour cancelling the result of the original affirmative nomination or “trigger” ballot, which he was declared winner of by 20 votes to 17, making the same points about the financial cost to the party of fighting a court battle and loss of focus on the borough election contests.

No date for the start of the fresh process is given by Fleming, though he does say that the same “freeze date” of 25 October 2016 will apply, meaning that members will again have had to have been members for at least six months prior to that date to be eligible to take part.

The email says nothing about the eligibility or voting entitlements of affiliated organisations, primarily trade unions, which was a focus of some of the main complaints about the process. However, Fleming states that “the process will be administered by the Greater London Labour Party”, thereby removing it from the control of Labour’s Local Campaign Forum (LCF) in Newham, which the complainants contend failed to administer or the process consistently or properly.

Fleming writes in his email that “the Labour Party maintains that all rules and procedures were applied correctly and that officers of the LCF acted in good faith with the information they were provided with”.

In a letter to Labour’s governing National Executive Committee, sent in January 2017, 47 party members in Newham, including 10 councillors, argued that there were grounds for questioning the validity of seven of the votes cast in favour of Sir Robin going forward automatically as Labour’s mayoral candidate in May this years rather than facing possible challengers in an open selection contest.

On London has learned that that the ballot paper for an affiliated branch of the TSSA union was conveyed directly to an officer of that branch by a councillor who is a member of Sir Robin’s mayoral team rather than being sent initially to a more senior figure in the organisation, as appears to have been the case with other unions. The TSSA vote was eventually cast in favour of Sir Robin.

A review by the Fabian Society of the approach taken by its Newham branch to deciding which way to vote found that it had “breached the society’s rules” in coming to its decision to back Sir Robin’s automatic candidacy.

The headquarters of Bectu, one of the unions with a local affiliated branch at the time of the ballot and which supported Sir Robin, could not confirm to On London that an affiliation fee was paid for the relevant year. Bectu seems certain not to participate in the re-run due its unconnected disaffiliating from Labour at national level at the end of 2016, following its amalgamation with another union.

At least one of the other unions which still has local affiliation status might cast more votes in the re-run than in the original ballot due to differing understandings of the rights of separate affiliated branches at that time.

Party members who’ve been pressing for the re-run believe its outcome could be close, depending on changes in the numbers of union preferences either way and because the memberships of some of the ward branches were finely balanced in their views the first time round.

Should Sir Robin fail to secure a majority in the re-run ballot he would certainly face challengers in an ensuing open selection battle, should he decide to contest it. Councillor Rokhsana Fiaz, who sits on the council’s important overview and scrutiny committee, is thought a possible contender. Councillor John Whitworth said in November 2016, when the original trigger ballot was taking place, that he wished to challenge Sir Robin to become Labour candidate.

Updated on 6 January 2018. Read all of On London’s coverage of the Newham mayor trigger ballot dispute via here."
Posted by John Gray at Monday, January 08, 2018