"Remembering Irene Stacey – a stalwart of our union, and a friend" 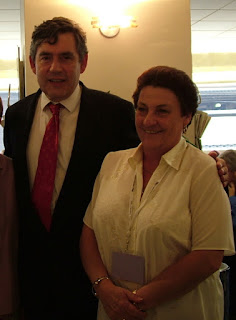 A fitting tribute from our General Secretary, Dave Prentis to Irene.

Throughout her time in UNISON – and through her illness – Irene’s bravery was clear to everyone who knew her, and an inspiration to all of us who worked and campaigned alongside her. She will be a huge loss to our NEC, her branch and our union.

Irene Stacey, a long-standing member of our NEC representing low-paid members in London, died earlier today after a long illness.

Irene was a stalwart of our union. Someone universally admired and respected by members, activists and staff alike. Formerly the branch secretary of UNISON’s local government branch in Newham, Irene served with the dedication and passion for which she was famous.
Her enthusiasm for our union was infectious. A passionate recruiter of new members, Irene was rewarded by the TUC for her efforts, and never stopped encouraging people to join UNISON – even when she was being treated in hospital. Yet if she was passionate about getting new members into the union, she was equally as strident when it came to standing up for them. To Irene, our members were amazing people who needed all the support they could get, and who deserved the best – and she saw it as her role to ensure that was the case.
The Labour Party was another organisation through which Irene fought diligently for better public services, better rights at work and better pay for all those who work for our communities. Irene sat on our Labour Link committee, always keeping conversations grounded in the realities of our members experiences, and represented UNISON at many Labour conferences, including in 2017. Irene was undergoing treatment at that time, but she would not let that stop her from playing a full role in the delegation.
Yet her dedication to the Labour Party never stopped her from holding the party to account. I will never forget Irene, about to be awarded a gold badge by the TUC for her recruitment work by Gordon Brown, taking the opportunity to upbraid the then Prime Minister over widow’s pensions.
That was typical of Irene. Throughout her time in UNISON – and through her illness – Irene’s bravery was clear to everyone who knew her, and an inspiration to all of us who worked and campaigned alongside her. She will be a huge loss to our NEC, her branch and our union.
Our thoughts today are with her beloved daughters Jo and Mandy, and her wider family.
RIP Irene – our friend.
Posted by John Gray at Sunday, January 21, 2018