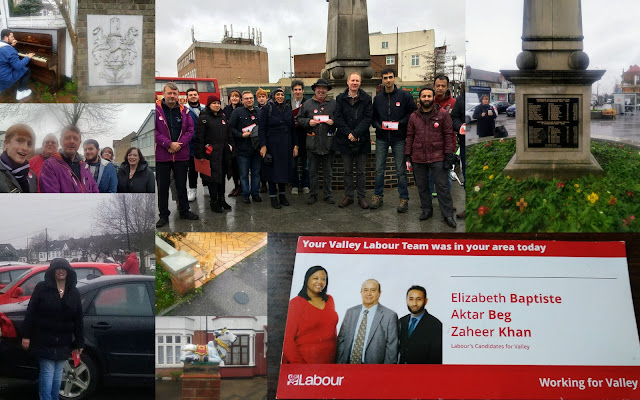 I have always agreed with the great Lake district walking author, Alfred Wainwright, that "there is no such thing as bad weather only unsuitable clothing". Despite this I forgot to take a hat and gloves for this mornings Labour campaigning in the now marginal seat of Chingford & Woodford Green (currently held with a majority of 2,438 by Tory MP, Iain Duncan Smith).

I therefore suffered somewhat in the cold and rain while in a West Ham Labour Party canvass team lead by our MP, Lyn Brown.

We were in Valley ward where there are currently 2 Tory Councillors and one Labour. My fellow UNISON Greater London Regional Council Officer, Elizabeth Baptiste, is standing here as a Labour Candidate.

Despite this being a traditional Tory ward, I thought we had good response and I had a number of decent political conversations with working class Tory voters who were now undecided on who to vote for in the next election. The state of the NHS, no pay rises and high housing costs are making some lifelong Tory supporters think again. As one disillusioned Tory supporter said to me "this government is treating people like me like S**t. So why should I support them anymore?".

After the canvass we recovered with welcome hot coffee and soup at the Aromas cafe in Chingford Mount.

As part of my campaign to persuade Labour Party members of the health benefits from political campaigning, I was also pleased to note that my google fit app recorded 8,169 steps. Other members of our team had a lower figure but I had to go back and forth to drag Lyn back to the team  after chatting too long to residents.
Posted by John Gray at Saturday, January 20, 2018