Getting fit with Labour (apart from eating chocolate cake) 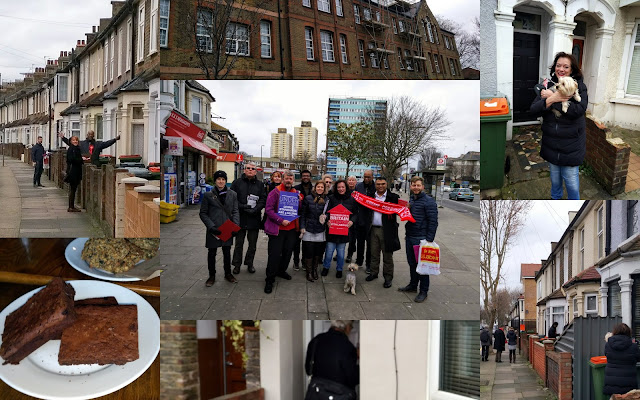 West Ham ward and the wider West Ham CLP are "safe" Labour seats but it is humbling how much support we get. It is also amazing the number of residents who tell us that they are Labour Party members. This does not mean that everything is perfect and I picked up as a local Councillor, casework from residents.

Also, I picked up loud and clear from a number of Party members and residents that they expect that there will be an open selection process for the next Labour candidate to be the Newham directly elected Mayor.

I am trying to record on my smart phone the number of "steps" that I do while campaigning but I forgot to check after we finished with coffee and yummy chocolate cake (thanks to Lyn) in the Sawmills cafe. I suspect that the consumption of cake outweighed the steps that morning but I had completed 7,036 steps by the end of the day (which included some other campaigning elsewhere in the borough).

So on balance I think it is still true to say "Go campaigning, Get fit with Labour".
Posted by John Gray at Sunday, January 28, 2018