UNISON Community Conference 2017: Day 2 (& many thanks to Kevin) 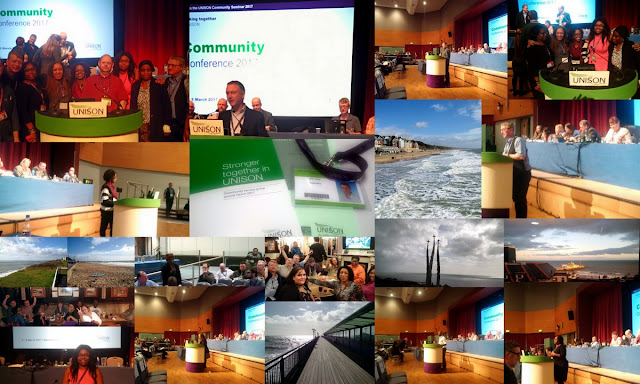 Steve Reed MP gave the keynote speech for the seminar and took no prisoners from those who said in the Q&A that it was possible for Councils to pass "legal no cuts" budgets.

I gave a presentation at workshops on "Democratising Housing Associations" with my London Regional Officer, Colin Inniss.

Our long serving Chair of our Community Service Group, Kevin Jackson, (top left)  announced that he will be stepping down this year. He told me that he will be expecting a blog post on this since I did one for his predecessor! Kevin has been a fantastic Chair and will be hard to replace.

Both of my UNISON branch motions were passed. I spoke on the one regarding Housing Associations on behalf of the SGE. A number of branch members spoke on a number of different motions.

There were many fine speeches but I remember the most the personal contributions from a number of delegates, who were from Eastern Europe and were obviously very concerned about their future in the UK following Brexit. They were all care and support workers. How disgraceful that they fear for their future, when they provide so much desperately needed care for our elderly, sick and vulnerable.