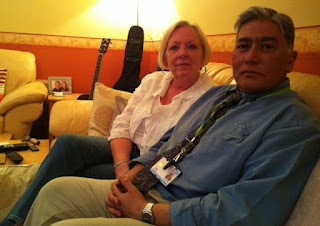 "A group of tenants is up in arms after their landlord announced a 40 per cent rent hike...

Eve Whitcombe and Jamil Khair (picture right) will have to pay a 40 per cent rent hike or leave their home of the past 18 years. Picture: Jon King

The neighbours live in flats reserved for key workers - who have jobs in schools and hospitals - with cheaper rents than market rates, but their landlord One Housing Group have said they should pay more or get out.
Tenant and retired NHS secretary Eve Whitcombe, who has lived in one of the West Ham buildings affected for almost 20 years, said: “We like it here. We wouldn’t want to move.
“They’re going to lose an awful lot of good people. It’s difficult to recruit teachers and NHS staff. Newham will be in deep trouble if they’re going to push keyworkers out of the area,” said 62-year-old Eve.
According to Eve, tenants received letters from One Housing last month telling them their rent would rise by 40pc on April 1 claiming people were subletting, but even now their landlords refuse to meet them in person to discuss the increase, which would add £200 to her monthly rent.
Now the neighbours - who live in Teasel Way - have signed a new, annual tenancy agreement and will be forced to pay up or leave their homes within two months.
“I want to feel secure at my age,” Eve added. “We feel One Housing are being greedy.”
Eve’s partner Jamil, a paediatric nurse, said: “There would be no difficulty finding jobs out of the borough because of the huge shortage of nurses and teachers.”
A One Housing spokesman said: “These homes are not general needs social housing. We offer them at a discounted rent as part of our mission to create homes that people with all incomes can afford.
“To make sure we are fair to all our residents, we look to charge appropriate rent according to the tenancy arrangements. In this case, we discovered a historic error by a predecessor organisation that meant residents have been underpaying for a significant period.
“As this rent is similar to a general needs rent some residents may have believed that they are general needs tenants,” he added.
“We recognise a rent increase is never welcome, which is why we are increasing them gradually and have talked to residents throughout to give as much notice as possible.”
The spokesman also said the homes remain excellent value for money and that since a public meeting on March 20 a number of people who attended had contacted One Housing looking for a home to rent at the new rate.
Cllr John Gray, who has met with tenants, said: “Myself and other councillors were horrified to hear about this. It is going to drive out key workers who perform vital public services for the people of Newham. What we know is that it is practically impossible for teaching assistants and care assistants to either rent or buy anymore unless key worker accommodation is secured.
“We are going to struggle over time to get staff for our schools and hospitals and care communities.
“I am really disappointed that One Housing is planning to do this without prior consultation, not just for residents but with key stakeholders like the council and local councillors.”
Hat tip Newham Recorder for story and picture. Check out my blog on the scandal here. It would seem from above that One Housing are planning to raise the rents even more than 40% and that its Comms team must live in LaLa land if they believe that the key workers who attended the meeting last week wanted to pay the new rate.
I am still waiting for a reply to my Councillor members enquiry from One Housing about why are they doing this and asking them to put the increase on hold until at least they meet residents and explain what they are doing. I have been told that I will get a reply by Friday 31 March (which is a whole day before the rent is increased on 1 April 2017).
Posted by John Gray at Wednesday, March 29, 2017