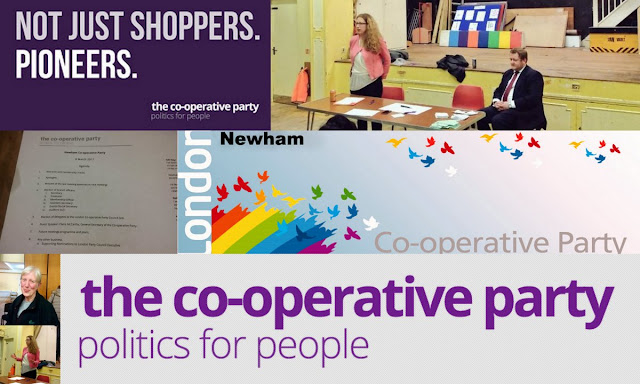 An excellent account of the meeting last week by James Beckles. There is another more pointed post here by another Newham Co-op member. You can click to a link to my post on the rerun AGM 2016.

It’s not everyday members of the Cooperative Party or any party for that matter with the sight of a General Secretary checking membership details at the door. But that’s the beauty of the Co-op movement and the state of play of Newham.


After members had been signed in everyone took their seats. There was some tension in the air as you would expect from the last heated meeting. But chaired by a London region representative the meeting kicked off. There were some noticeable absences including the Chair of Newham branch, Lester Hudson, who we were told was attending an awards ceremony. Nonetheless the meeting began.

The positions not filled at the last meeting were up for contention. These included Secretary, Treasurer, Membership Officer, Assistant Secretary and the New position of Events/Social Secretary. All candidates had to submit prior to the meeting a 100 word statement for the position they were standing for and it was good to read supporting statements and what candidates would do if elected.

There was a point of order or clarification raised whether candidates who were nominated would be on the ballot. The representative from London region was clear that all Newham Co-op members were afforded the opportunity to stand for a position as long as they submitted a statement.

Onto the vote for Secretary, Gill Hay vs. Neil Wilson. A tense ballot and count and Gill was victorious. The Treasurer was next, as there was only one candidate, Averil Donohue who is current Treasurer, they were duly elected.

Membership Officer again had only one candidate, Alan Griffiths, he was duly elected. Assistant Secretary, currently John Gray, was elected as the sole candidate.

Then came the exciting part. The positions no-one submitted statements for. These included the new post of Events/Social Secretary and the Auditors (x2).

The candidates for Events/Social Secretary were Sugathan and Neil Wilson. Both spoke on the spot and gave good reasons why they should be elected. The ballots were distributed and counted. The winner we Neil Wilson.

Finally the heralded positions of Auditors. This I where I dear reader come in. I was nominated by four fellow cooperators and I was duly elected. Thank you!

The second Auditor elected was Conor McCauley and much desired.

Finally the highlight of the evening was the speech by Claire McCarthy. In consistent Newham fashion those who were there solely to vote left and those I assume who were generally interested in hearing from our General Secretary stayed.

Claire gave a clear and impassioned speech about co-op values, ethical politics, supporting Labour councillors who wanted to stand as Labour/Co-op councillors (which I think would be advantageous and I may consider it) and continuing to build a cooperative and mutual based society in Newham and beyond.

Overall the evening was well ordered and considering the positions up for grabs it was good natured. Perhaps having Co-op HQ present officiating made certain potential offenders behave on the night. But we do need more meetings like these where it’s about speakers, debates about policy and positions, development of co-op values at a local level that is inclusive and supportive of Newham’s communities.

Again I sign off by saying I look forward to the next Newham Co-operative Party meeting and hope I will be able to attend."

(hat tip to James for one of the pictures in collage and to Tower Hamlets Co-op for stealing their logo and amending it)
Posted by John Gray at Tuesday, March 14, 2017