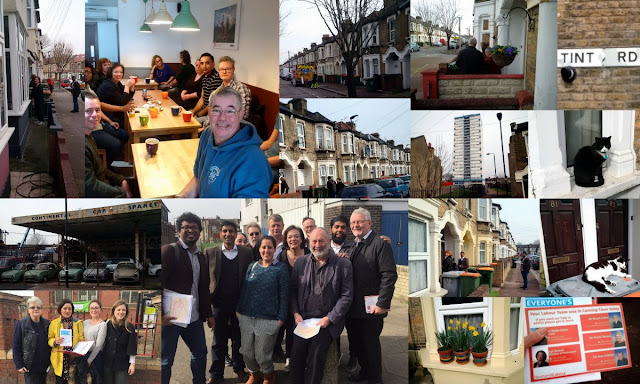 This college is from Saturday 11 March when West Ham Labour Party activists came to support the local Party in Canning Town South ward. Our MP Lyn Brown was there and we all knocked on doors in the ward asking if they had any issues that they wanted to discuss with their MP or local Councillors.

The response was on the whole very positive. By coincidence council contractors were marking the car parking bays in the area for the introduction of a new controlled parking zone. Some residents were genuinely worried about this but the vast majority realised that this had to be done to stop the area being turned into a car park for commuters.

The only other apparent  issue is that many of the houses in our canvass area are owned by a private landlord who is apparently trying to "encourage" residents who have controlled rents to move to other accommodation. We did not pick this issue up in the doorknock but local Councillors are aware and will be investigating.

Also that day there was a Labour canvass in Custom House (see photo in collage on bottom left).

Afterwards a number of canvassers from different parts of the CLP met up for coffee, cake and gossip (top left)
Posted by John Gray at Monday, March 20, 2017