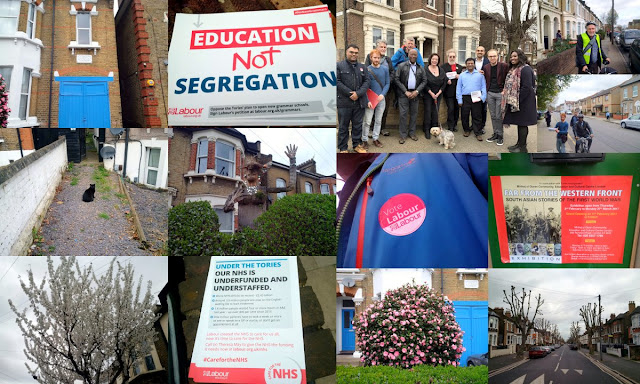 We also gave out leaflets on the Labour party campaigns about "Education not Segregation" and "Our NHS is underfunded".

I had an interesting conversation with some students from India whose home state Kerala, (and also in West Bengal state), is controlled by the Marxist Communist Party of India. They were not supporters but recognised that in their state they have the highest levels of literacy, women to men ratios and life expectancy in India.

While door knocking we had a discussion with long serving members on how in the 1970s the Freemasons in Newham Council (Councillors and Council officers - used to have a lodge in East Ham Town Hall) were kicked out of the local party and the Council for alleged corrupt practices.

After the canvass Cllr John Whitworth, Cllr Anam Islam and I went to see the excellent "Far from the Western Front" First World War Exhibition in the Minhaj-Ul-Quran mosque in Romford Road which is due to finish tomorrow.
Posted by John Gray at Friday, March 24, 2017