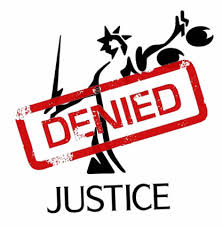 For those who think they don't need trade unions to fight for justice at work, I say think again.

Making an application for an employment tribunal now costs £250 and then a further £950 for a hearing. As this research shows, low paid workers with strong cases are being blocked.

"A new report to be published in academic journal Modern Law Review on Monday (27 March 2017) will put forth that the introduction of employment tribunal fees in 2013 was "a clear violation" of UK and EU law.

The authors, Jeremias Prassl from Oxford University law school, and Abi Adams, of its school of economics, analysed government data in order to show that for up to half of claimants with a strong case, the expense of taking their claim to court was higher than the expected payout if they were successful.

These workers - usually in low-paid, insecure positions - are therefore put in the position of losing money to enforce their rights. As a result, the academics described the fees as "disproportionate" and argued that they are illegally blocking workers from access to justice.

The paper will be published on the day that Unison's judicial review against the fees will be heard in the Supreme Court, and the authors commented in support of the union's case".