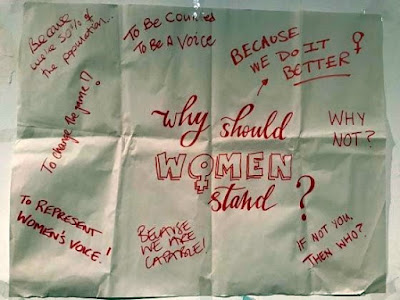 "On Monday, West Ham women gathered to boost the sisterhood for the 2018 local government elections.

It was so wonderful to see a group of women from all walks of life dedicated to making West Ham better.

Despite Monday being match day, the West Ham Labour HQ was full of bright, bubbly and brave women who brought snacks and heaters for the evening.

The training and AGM was hosted by the amazing Councillor Seyi Imoleayo Akiwowo, who chaired the discussions and helped us understand what being a Local Councillor really meant.

We were asked what we wanted to improve in Newham and why we should stand. Councillors from all over Newham (including Cllr Charlene Mclean, Cllr Rachel Tripp, Cllr Rokhsana Fiaz, Cllr Veronica Oakeshott, Cllr Aleen Alarice, Cllr Anne Easter and Cllr Julianne Marriott) all gave inspiring talks about their day to day work and getting through the selection process.

The network was really welcoming and supportive. The group was full of positive strong women who are focused on making a difference. If we learnt one thing it is that people are really passionate about parking, especially on Match day!

After the training Seyi chaired the AGM. As Seyi is stepping down from being Chair of West Ham Women’s Forum, the new team would like to thank her for all of her hard work. We look forward to picking up where she left off, and we hope to do a great job in the next year.
The new team is: