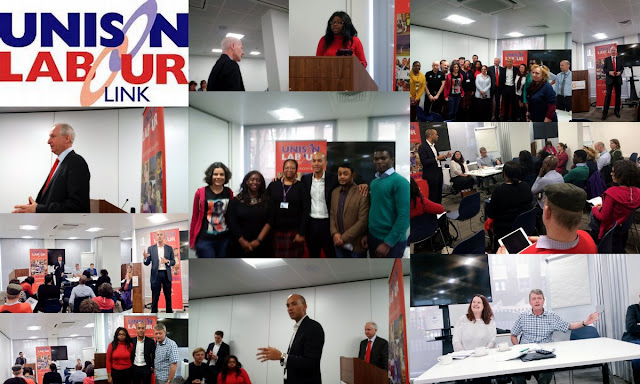 Pictures from recent Regional Labour Link Forum in central London.  Labour Link is the UNISON political vote that supports the Labour Party.  I chaired the meeting and after opening remarks, introductions, workplan, financial report (don't ask) we moved on to motions.

My branch had submitted a motion on building a new national consensus on why we need to build affordable and decent homes for all. This motion was moved by our ace branch officer, Mitsy Harmon-Russell, and after some minor amendments on restrictions on rent levels (which were accepted by our branch with qualifications about how the motion was about building a national consensus and not just a wish list) was accepted unanimously. Another motion submitted by Lambeth branch on "Labour is the Party of the the NHS" was also passed overwhelmingly.

The meeting was then joined by UNISON Eastern Region Labour Link, who also had their annual forum next door. Tracey Grant and I co-chaired the rest of the meeting. We were joined by our guest speakers, National UNISON Labour Link secretary Keith Birch, Daniel Zeichner MP and Chuka Umunna MP (to give a joint Parliamentary report).

Keith talked about the continued threat from the Tory trade union bill which was designed not only to to attack unions but also to starve the Labour Party of funds.

Daniel is a well respected former UNISON Labour link national official who was elected for the first time as MP for Cambridge in 2015. He is now shadow Labour minister for buses and is their most energetic supporter.  He pointed out that nationally more people in this country rely on buses for their transport needs than trains. This fact is rarely mentioned during the often wall-to-wall media coverage about commuter railway problems in the South East of England.

Chuka is the MP for Streatham, London and a former shadow Secretary of State for Business, Innovation and Skills. He gave a powerful speech on how he believes we can still win the next General election and also the hypocrisy of the other opposition parties who are attacking Labour for accepting the democratic decision of the electorate over Brexit when before the referendum they were attacking Labour for opposing having a referendum in the first place.

In the Q&A Chuka was challenged by delegates concerned by the actions of the Parliamentary Labour Party towards our leader, Jeremy Corbyn. Chuka accepted that this was a fair criticism of the PLP before the outcome of the second leadership election but since then it is now accepted that Jeremy is the leader and should be supported. However, that does not mean that there should be no criticism of those who advise him. He pointed out that The Times had leaked before the recent budget that the Tories would be breaking a manifesto promise by raising National Insurance for the self employed but this was not written into Jeremy's speech on budget day and was a lost opportunity to attack the Tories.

The forum ended on what I thought to be a positive and constructive note. The Labour movement family is like all families. At times fractious and argumentative, with all sides convinced they are right and have been wronged but we must all put this aside since we share a common enemy and a common solution. The Tories are our enemy and our common goal is the election of a Labour Government. If we unite, it is still possible and we can still do it.